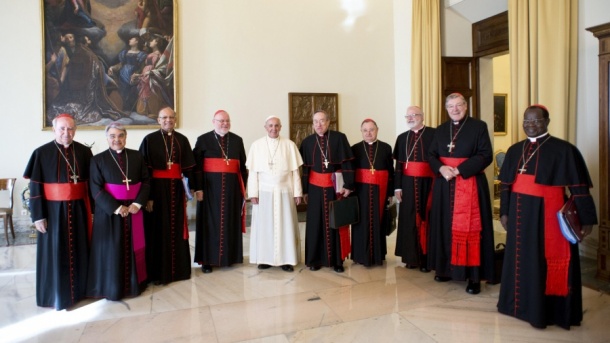 Vatican City, 17 February 2014 (Vatican Information Service)
This morning in the Domus Sanctae Marthae the Pope's third meeting with the Council of Cardinals began. The Council was created on 13 April 2013 and confirmed by Pope's chirograph of 28 September, to assist in the governance of the Universal Church and to draw up a plan for the revision of the Apostolic Constitution “Pastor bonus” on the Roman Curia. The meeting will conclude on 19 February. Following the morning session, a press conference was held in which Fr. Federico Lombardi S.J., director of the Holy See Press Office, presented information on the meeting which begins ten days of intense activity on the part of the cardinals.
“As usual the Cardinals initiated their work with a Holy Mass concelebrated this morning at 7 a.m. in the Sanctae Marthae chapel, after which they began their meetings in a nearby room. Archbishop Pietro Parolin, secretary of State and future cardinal, was and will continue to be present”.
He continued, “The morning was dedicated to hearing the representatives of the Commission for Reference on the the Organisation of the Economic-Administrative Structure of the Holy See (COSEA). Three members of the Commission were present, rather than the entire Commission: the president Josef F.X. Zahra, the secretary Msgr. Lucio Vallejo Balda and Joachim Messemer, who is also the international revisor for the Prefecture of Economic Affairs of the Holy See. The work carried out during the eight months since the creation of this body was presented, but no decision was made. Following the meeting, the cardinals dined together with Cardinal Giuseppe Bertello, president of the Governorate of Vatican City State, and this afternoon they will continue their meeting, but without the attendance of the COSEA representatives”.
“Tomorrow, Tuesday 18 February, the Commission for Reference on the Institute for Works of Religion (IOR) will be heard. On Wednesday, Pope Francis will hold the usual general audience in St. Peter's Square, while the cardinals will continue their work in his absence and, in the afternoon, the cardinals of the so-called “Council of Fifteen” instituted by John Paul II and responsible for the general consolidated financial statement of the Holy See and the Governorate of Vatican City State will meet with the “Council of Eight”, the cardinals who are participating in the meetings held from 17 to 19 February”.
The extraordinary consistory of cardinals, dedicated to the family, is scheduled to begin at 9.30 a.m. on Thursday 20 February in the New Synod Hall. The work of the consistory will begin with a greeting from the dean of the College of Cardinals, Cardinal Angelo Sodano, and there will be an address from Cardinal Walter Kasper. The participants will meet in the morning session from 9.30 a.m. to 12.30 p.m., and in the afternoon from 16.30 to 19.30. The meeting will conclude on Friday.
On Saturday, 22 February in St. Peter's Square there will be a consistory during which the Pope will create sixteen new cardinals, and on Sunday 23 February the Holy Father will concelebrate Mass with the new cardinals. On Monday 24 and Tuesday 25 February, a meeting of the Secretariat of the Synod and the Council of Fifteen will take place.