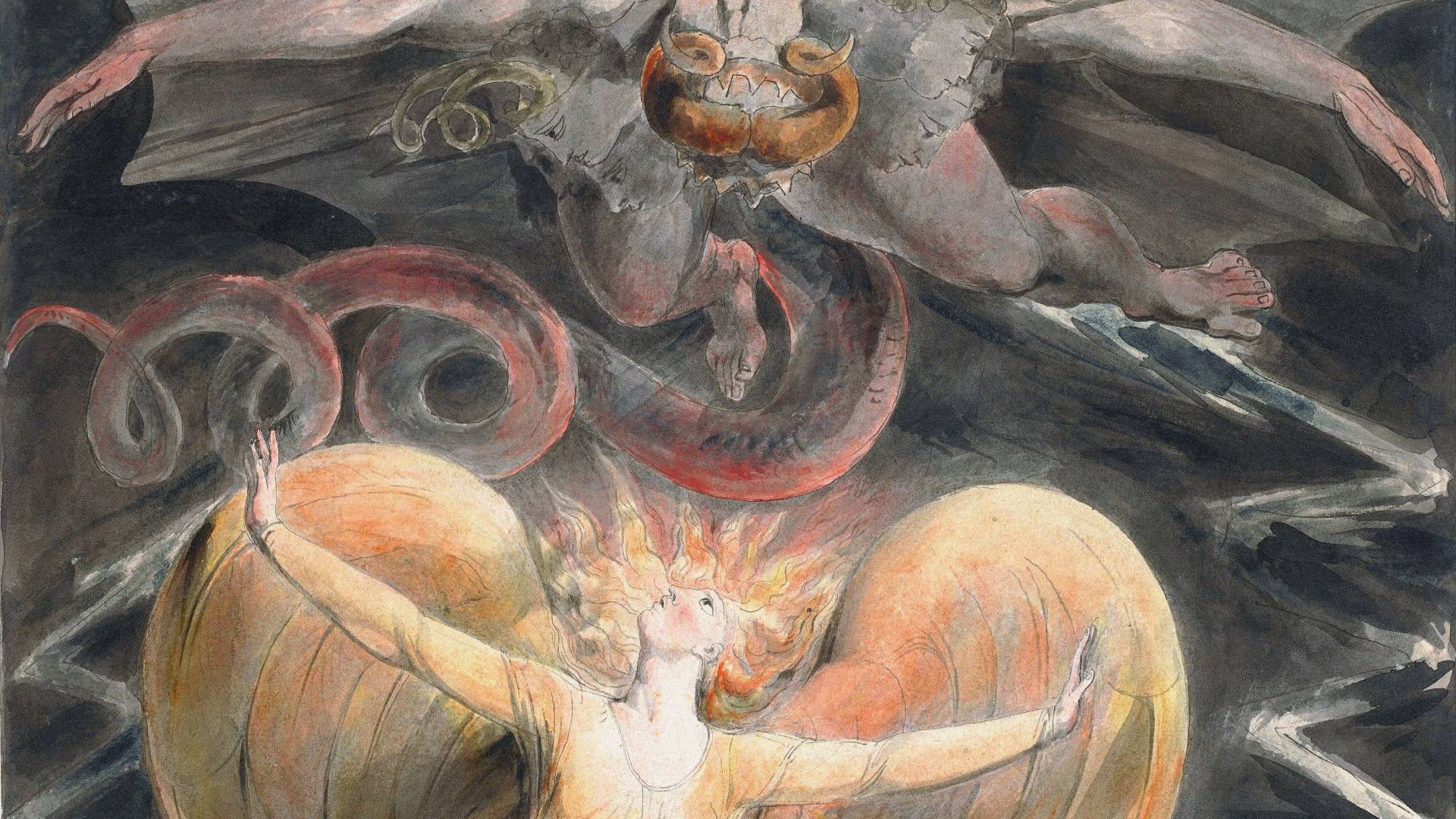 Detail of The Great Red Dragon and the Woman Clothed with the Sun by William Blake (Source: Wikimedia Commons)
Last week, I reviewed The Religion of the Apostles: Orthodox Christianity in the First Century, a recent book by Father Stephen De Young, a priest of the Antiochian Orthodox Christian Archdiocese of North America. This week, I would like to share some thoughts about the impact that this book and other related works have had on my life. I discovered this book and its author through a podcast that Fr. De Young co-hosts, called The Lord of Spirits. In this live radio show, the hosts take calls from listeners and generally discuss the realities of the "invisible world''. If you are interested in saints, angels, demons, gods, giants, and in-depth discussions of the Book of Enoch, this is the show for you. The program showcases the extraordinary erudition of Father Stephen De Young, whose knowledge of biblical and para-biblical literature and languages is, to say the least, unusual. Along with his co-host, Father Andrew Stephen Damick – well known as the host of the Amon Sûl podcast, which discusses Tolkien's Legendarium in light of the Orthodox Christian faith – Father De Young introduces the audience to a rich cosmological understanding of the Christian faith, which he believes has been preserved in the Orthodox Church. Although there are certain religious differences between the Catholic and Eastern Orthodox Churches, there remains much relevance for Catholics in paying attention to what the latter tradition has to offer. The deepest divisions between Catholicism and Orthodoxy generally revolve around ecclesiology rather than different understandings of the foundations of the Christian faith. Indeed, the hope of a future reunion between Catholicism and Orthodoxy seems to be rooted in the relative closeness – at least a perceived one – of the faith as expressed in these two separate institutions, whose disunity is determined in particular by a different understanding of the authority of the Bishop of Rome over the mystical body of Christ. I also believe that in a society like the one we live in, good arguments about the authenticity of the Christian faith in general are never out of place. Most of all, I would like to share the experience I have had in exposing my mind to the work of these two priests. Coming, like many of us, from a dry materialistic background and living, like all of us, in an individualistic and liberal society, I was seduced by the remarkable complexity, richness, and depth of what an authentically Christian understanding of the cosmos can be, in all its beautifully ornamented hierarchy of material, hybrid, and spiritual beings and realities. In this sense, the works of Fathers De Young and Damick enriched my understanding of some of the more mythic aspects of Scriptures, without reducing their meaning to poetical or allegorical purposes. In its infinite wisdom, the Latin and Western tradition of Christianity has, from its beginnings, sought to understand the faith and to develop ways, through philosophy, to improve and refine our ways of contemplating and speaking about God. At its best, this is the practice of some of our greatest mystics, such as St. Thomas Aquinas and many others. Yet in our modern context, and often despite the Church's warnings, we have been tempted to separate this practice from the cosmic vision it was intended to reflect, and we have, in some cases, isolated ourselves before God and deprived ourselves of the whole of Creation. This, in itself, is not the teaching of the Roman Catholic Church, although we may be tempted to act as if it were. As Christians, we are not called to blindly acquiesce to the pale and superficial materialism often characteristic of our time, content to confess our friendship with Jesus amidst the apparent ruins of His Kingdom. Yes, we are called to a spirit of hope and a joyful attitude, but to truly achieve this and to make sense of the faith we confess to the full extent of its implications, we must be witnesses to the profound "weirdness" of our faith for the world in which we have been called to live. This feeling of weirdness, which can be felt when we unabashedly discuss angels, demons, giants, and gods, would have been foreign to the first witnesses of Christ, Father Stephen De Young insists. In fact, from a historical perspective, it is today's materialistic normalcy that is deeply unusual. I don't pretend to have absorbed everything that Fathers De Young and Damick have to say in their respective books and podcasts. I leave the theology of it all to further investigation, discussion, and in-depth study. But insofar as they help us move beyond the "buffered self'' – a concept developed by Charles Taylor, the famous Canadian Catholic philosopher, in particular to talk about the impoverishment of our perspective on spiritual realities – I think their work is very valuable and well worth listening to and reading. I would like to see more Catholics trying to do the same. I think we have everything in our Tradition to do so in a way that would be faithful, beautiful, good, and truthful.