The Vatican and the Israeli-Palestinian conflict: peace trumps politics 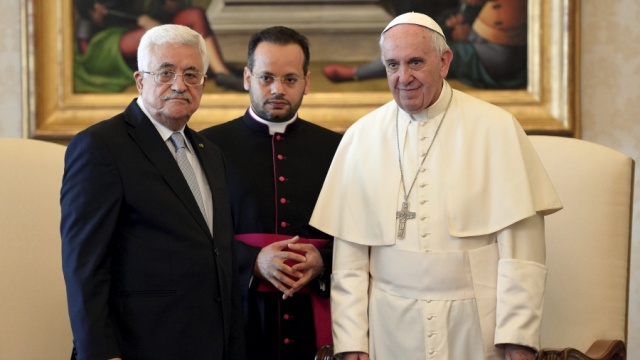 The enormous amount of media attention that Pope Francis attracts has highlighted the Church’s influence in the world of global politics. The Pope, whoever he is, is a spiritual leader, but one with a permanent seat at the political table. Hardly a week goes by in which Francis doesn’t meet with some head of state or foreign diplomat to discuss religion and politics in the respective country.
This past week it was the Palestinians’ turn. On May 13 the Vatican announced that the Bilateral Commission of the Holy See and the State of Palestine had finalized the draft text of an agreement on essential aspects of the life and activity of the Catholic Church in Palestine.
Then on May 16, on the eve of a canonization Mass in which two Palestinian nuns were proclaimed saints, Pope Francis met with Palestinian President Mahmoud Abbas. The two men expressed their hope that peace talks would resume with Israel and that interreligious dialogue be promoted across the region.
Predictably, the three events—the bilateral agreement, the meeting with Abbas and the canonization of two Palestinians—reignited the discussion over the Vatican’s recognition of the “state of Palestine,” a recognition Israel categorically denies.
Israeli officials suggested that such recognition from third parties discourages the Palestinians from returning to the negotiating table, and some pro-Israeli voices even raised concern over what this could mean for Catholic-Jewish relations.
For the sake of clarification, it is helpful to review the Vatican’s policy on the Israeli-Palestinian conflict and reiterate the rationale behind it.
When last Wednesday’s announcement came from the Bilateral Commission, some credible voices in the media rightly pointed out that it wasn’t the first time the Vatican officially recognized the “state of Palestine.” It has been using this language since the 2012 United Nations vote to grant Palestine “non-member observer status,” a status shared by only one other state at the UN: the Holy See.
Far from going out-on-a-limb with its language, the Vatican simply recognizes what the vast majority of other nations recognize (the UN vote carried 138 in favor and 9 against with 41 abstentions).
And beyond this, it should be pointed out that the Vatican has long supported a “two-state” solution to the conflict. Upon his arrival in Tel Aviv last year, Pope Francis said:

“I renew the appeal made in this place by Pope Benedict XVI: the right of the State of Israel to exist and to flourish in peace and security within internationally recognized borders must be universally recognized.  At the same time, there must also be a recognition of the right of the Palestinian people to a sovereign homeland and their right to live with dignity and with freedom of movement. The “Two State Solution” must become reality and not remain merely a dream.” (Welcome Ceremony)

Pope Benedict said as much during his visit to the Holy Land in 2009, and John Paul II on many occasions insisted on a peaceful solution to the conflict. He also sought solidarity with the Palestinian people by fostering a relationship with then Palestinian leader Yasser Arafat. Upon hearing of Arafat’s death in 2004, the Vatican issued a statement saying the Pope, “feels particularly close to the family of the departed, the Palestinian authorities and the Palestinian people,” and that he has “called upon the Prince of Peace to let the Star of Harmony shine over the Holy Land so that the two peoples who dwell in it may reconcile as two independent and sovereign states.”
Suffice it to say, no ground-breaking language was used over the past week by the Vatican regarding the Israeli-Palestinian situation. The Church’s position has been clear for years: a peaceful two-state solution whereby both parties respect the right and legitimacy of the other, with absolutely no recourse to violence. In recognizing the “state of Palestine” since 2012, the Vatican is adhering to the legitimate decision of the United Nations.
The Church always insists on peace over politics. Its support for a realized Palestinian state and a peaceful coexistence built on respect and mutuality is not exclusionary or one-sided, as some voices are suggesting. The Church equally supports the right and security of an Israeli state. But when it comes to conflict, especially violent conflict, the Church raises the bar beyond petty politics to the greater good, that is, justice and peace. As Pope Benedict XVI said in an address to the President of Israel in Jerusalem in 2009, “A nation’s true interest is always served by the pursuit of justice for all.”