The Uganda that Greets Pope Francis 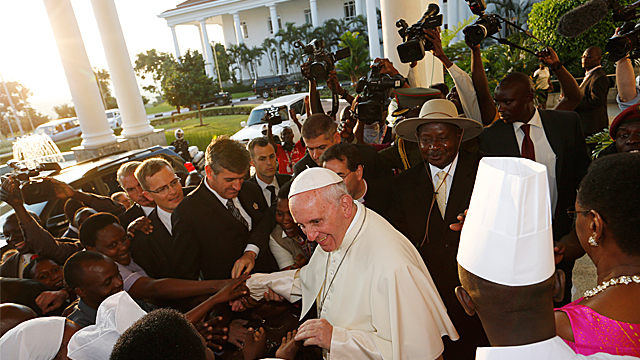 During his trip to Africa, Pope Francis will land in Entebbe, Uganda on Friday, November 27. It will be the second country he visits during the voyage. As is custom, he will pay a courtesy visit to the President of the Republic and meet with civic authorities and the diplomatic corps. That same evening he will go to Munyonyo to greet catechists and teachers.
This portion of the visit bring the Holy Father in contact with a Central-Eastern African state known for its lakes and rivers: Lake Victoria and the White Nile. It is  a land crossed in the south by the Equator. It is a land of nearly 35 million inhabitants.  The capital, Kampala, owes its name to the imagination of the English who, when they arrived in this territory called it "Hills of Impala." The Impala, of course, being  a species of antelopes.
Over the past forty years the country has experienced a constant state of political instability which we can trace to 1978, the year in which Idi Amin  - a politician and military dictator of Uganda as well as President of the country from 1971 to 1979- decided to invade Tanzania under the guise of a territorial dispute.
The plan soon proved unsuccessful and led to a huge defeat that allowed for Tanzanian invasion of Uganda, complete with looting. This represented the total defeat of the regime. Amin fled first to Libya and then Saudi Arabia. He was replaced in April 1979 by a university professor, Yusuf Lule.
After the rigged elections of 1980, the current President Yoweri Museveni took command of the National Resistance Army guarding the southern areas of the country. His command inaugurated years of guerrilla warfare, torture and bad government.
In the late 80's, civil war tore the country apart with over 300,000 deaths. It was a struggle between the Uganda National Liberation Army (UNLA) supported by neighboring Tanzanians, and Musveni’s NRA who took control of the country and Alice Auma’s forces, leading a para-religious army.
Victory went to the NRA. However, Joseph Kony organized an army (initially Liberation Army of the Lord, then Salvation Army Christian Kingdom, then the Lord's Resistance Army, or LRA) in order to defend the rights of Acholi minorities who had exterminated during the dictatorship Idi Amin Dada, and established a theocratic state.
Only ten years ago, however, the International Criminal Court accused the leader of the LRA for crimes against humanity. He perpetrated rape, assaults, murder, child abuse, use of child soldiers, and mutilation.
The situation has stabilized in recent years. Uganda is currently a semi-presidential Republic and the president is Yoweri Museveni of the National Resistance Movement.
The Pope will find a country where about 85% of the population are Christians. Among them the two largest groups are Catholics and Anglicans who make up 45 and 35 percent of the population respectively. Only 12 percent of Ugandans are Sunni Muslims while an even smaller 2 percent of the population professes traditional African religions. Other non-Christian faiths account for less than one percent of the population.
The Holy Father will visit two shrines dedicated to the martyrs of Uganda: one a Catholic Shrine, the other Anglican. In the Catholic shrine he will celebrate a Mass for the Ugandan martyrs. It will be followed by a meeting with young people at Kololo Air Strip in Kampala, a visit to the House of Charity of Nalukolongo, meetings with the bishops of Uganda, and with the clergy and religious of the region.
That meeting will the pope’s last appointment before leaving for Bangui in the Central African Republic, the last leg of his African journey.