The three who touched the Cross 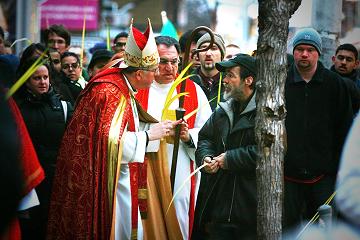 The following account of the Palm Sunday WYD Cross procession was written by Salt + Light editor Richard Valenti. As described earlier on the S+L blog, three Dominican Sisters of St. Cecilia arrived in Toronto on April 3rd. They were staying for three days, so I was asked to take them around the city in their free time. 'Three' turned out to be a recurring theme that weekend, but the 'three' that really touched me was the trio of people who venerated the cross on Saturday night, as it processed through the streets of Toronto. As part of the diocesan World Youth Day events, the WYD Cross was carried westwards along Queen Street from St. Paul’s Basilica to St. Michael’s Cathedral. It was evident from the storefronts that this diverse stretch of Toronto is one of the city's least affluent areas. As one of three photographers documenting this journey, I had a unique perspective of those partaking in the pilgrimage. About three blocks away from the Basilica, I noticed one onlooker who expressed interest in us and wanted to touch the cross. She hesitated at first, but then moved to touch it. I could see that she was quite moved. It seemed she was embracing this opportunity to connect with the Church. The second person, about one block further down the road, seemed only interested in getting his photo taken with the cross, as if he were posing beside Mickey Mouse at Disneyland. This was not the most inspiring witness of this evening, but I humoured him by pointing my camera in his direction and firing off a few shots that I had no intention of keeping.  Then a third person approached the cross -- a homeless man who made his way towards Archbishop Thomas Collins. The man stopped before the Archbishop of Toronto and explained his plight. Archbishop Collins stopped the procession, turned again to the man and offered a blessing. 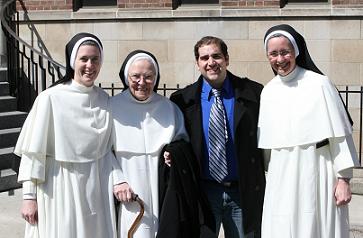 "Wow," I thought. "Where else other than the corner of Church and Queen street could one see the leader of the largest Archdiocese in Canada, followed by hundreds of young people, blessing a homeless man?"