The Significance of Pope Francis’ visit to Korea 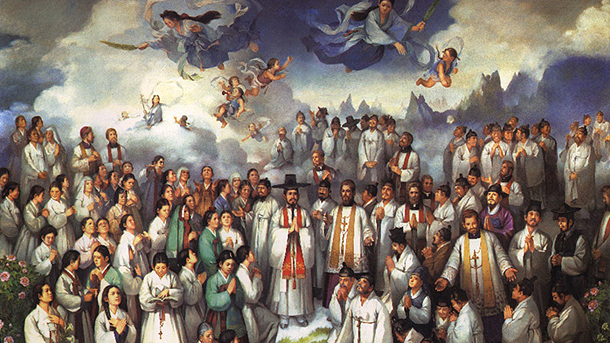 The focus of Pope Francis’ visit to Korea during the 6th Asian Youth Day, is to meet with the Asian youth, to celebrate the Beatification Mass for the 124 Korean martyrs and to celebrate a special Mass for Peace and Reconciliation.  During this historic visit, he will lead the Asian Catholic Community in celebrating the past, embracing the present and blessing the future, according to the Most Rev. Gyuman Basil Cho, Auxiliary Bishop of Archdiocese of Seoul. This visit marks the first time that a Roman Pontiff has visited Korea in twenty five years, when St. Pope John Paul II visited the Korean Peninsula for a Eucharistic congress in 1989. The official theme “Arise, Shine (Isaiah 60:1),” will serve to encourage the growth in faith in the country and give hope to those suffering while promoting peace and reconciliation between North and South Korea. The Beatification Mass that will be celebrated on August 15 will be for the 124 Korean martyrs who died for their faith. For more than a hundred years, over 10,000 believers suffered persecution. They were tortured, beheaded, hung or drowned. Among the 124 Korean martyrs that will be Beatified is high-class scholar Jichoong Yoon, who gave up his privilege in order to live by faith. All classes of men and women were included in the persecution. According to Professor Kwang Cho, the best known historian of the Korean Catholic Church, “Korean martyrs were proactive. They arose, shined and gave God the glory. Catholics, especially from the lower classes, were taking themselves as nobility carrying on God’s holy missions.” For example, Il-Kwang (Simon) Hwang was the butcher who was respected greatly in the community regardless of his low status. This was completely counter-cultural in the neo-Confucian ideal society and thus punishable by the law of that time. Despite extreme torture, Hwang retained his cheerful spirit. He declared, “There are two heavens. One is in our community and the other is the one after life.” The most distinctive feature of the Korean Church is that it is founded by the laity, and flourished through the many sacrifices of the martyrs. When Father James Zu Mun-Mo (Zhou Wen-Mo) from China, the first Catholic priest dispatched to Korea, arrived at the request of the Korean Church group, there were already 4000 members. When a warrant was issued to Fr. Zu’s arrest, he refused to escape to China and suffered martyrdom with his fellow Catholics. The spirit of martyrdom survived a long series of persecutions and has been the root and driving force of the Korean Catholic Church. Their firm faith, community spirit and charity work have had a great impact on the Korean society. Despite the growing faith in Korea, bothChurch and society are not without their problems. Koreans are dealing with a new set of social issues that challenge our faith and hope for the future. A high rate of suicide, divorce and unemployment affect the youth in Asia. Conflicts between North and South Korea are still threatening our peace in the Peninsula and the East Asia and truly testing the faith of the people. Pope Francis has mentioned to not to be afraid of going outside our ways of thinking in order to follow God because God always goes beyond. What will be Pope Francis’ message be to the Asian youth during his Apostolic journey to the Asian continent? How will his message resonate with all of us? We all count down the days for his soulful messages of peace and hope to arrive.
By Jeun Marie Lee, editor at Salt + Light.