The Short Straw Chronicles: The Lowest People on Earth

It's rare that a tourist attraction actually lives up to the hype. I am happy to report that the Dead Sea is one such tourism bulwark. It is genuinely the most interesting place I have ever visited!
A few quick facts about the Dead Sea: 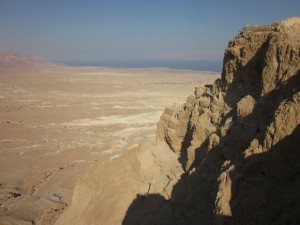 Here is a poem from a handbook on the Holy Land lent to me from a well-weathered pilgrim:

There are two Seas by Bruce Barton There are two seas in Palestine. One is fresh, and fish are in it. Splashes of green adorn its banks. Trees spread their branches over it and stretch out their thirsty roots to sip of its healing waters. Along its shores the children play as children played when He was there. He loved it. He could look across its silver surface when He spoke His parables. And on a rolling plain not far away He fed five thousand people. The river Jordan makes this sea with sparkling water from the hills. So it laughs in the sunshine. And men build their houses near to it, and birds their nests; and every kind of life is happier because it is there. The river Jordan flows on south into another sea. Here no splash of fish, no fluttering of leaf, no song of birds, no children’s laughter. Travelers choose another route, unless on urgent business. The air hangs heavy above its water, and neither man nor beast nor fowl will drink. What makes this mighty difference in these neighbor seas? Not the river Jordan. It empties the same good water into both. Not the soil in which they lie; not the country round about. This is the difference. The Sea of Galilee receives but does not keep the Jordan. For every drop that flows into it another drop flows out. The giving and receiving go on in equal measure. The other sea is shrewder, hoarding its income jealously. It will not be tempted into any generous impulse. Every drop it gets, it keeps. The Sea of Galilee gives and lives. The other sea gives nothing. It is named The Dead. There are two kinds of people in the world. There are two seas in Palestine.

Today was spent in the desert but tonight I write from Jerusalem! (Whenever I say Jerusalem I want to follow it up with "built as a city, strongly compact; it is there that the tribes go up...") I will write more as this treasure is opened to me. More to come!