The Short Straw Chronicles: Let my prayer rise unto Thee

Today I had a pronounced pilgrim-panic spell. It was early morning here in Jerusalem; I had just come from Mass at the Holy Sepulchre, I had 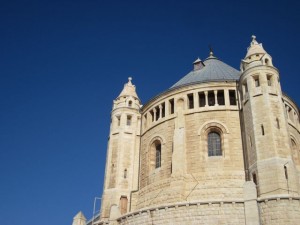 consumed a potent coffee whilst checking my email/ blogging at a little cafe and I had read a good portion of the Jerusalem Post. And it was only 8:30! “I am really on top of my game,” I thought as the six of us piled into the van with our guide and driver. My self-satisfaction only lasted until we pulled into Caiaphas' driveway--our first stop of the day. At this point, I realized that I had forgotten my camera. “Caiaphas, Caiaphas....who are you?” My mind raced to try and remember which role he played in the scriptures. Our guide then jogged my pokey Catholic memory: Caiaphas was the high priest from the time of Christ's crucifixion. I realized just then exactly why I had forgotten my camera.
We descended down the stairs into the “holding tanks”. I was about to see the place He spent His last night among us. Born in a feeding trough in the cold and thrust into a rock pit to await His death. On my descent, I was told that the prisoners were lowered in by ropes or otherwise--they did not have the privilege of stairs. The “Sacred Pit” was lit with lanterns like candles. The room was chiseled out of a huge rock face and the ceiling was low. I felt a wave of emotion wash over me as I placed myself there with Him. Waiting, waiting for death to come. A neighbouring guide quietly prayed Psalm 88 with her group: 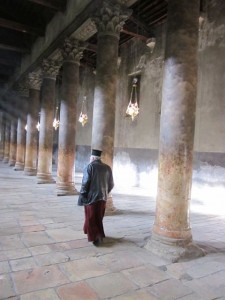 “O Lord, my God, I call for help by day; I cry in the night before thee. Let my prayer come to thee.... I am a man who has no strength, like one forsaken among the dead, like the slain that lie in the grave, like those whom thou dost remember no more, for they are cut off from thy hand.”

Jesus knew the Psalms by heart, she had told the silent pilgrims, many of whom were caressing the walls with eyes tightly closed in prayerful meditation. We were transfixed in our places in the pit, unable to speak or to make a move. Where was His mother? Was He all alone down here? Did he sweat blood here, too? Did He feel His Father's Love? I stood empty-handed and gladly camera-less. As it turned out, I found my camera on the floor in the van – it had conveniently fallen out of my purse for that site. There are so many other highlights of today that I would like to tell you about but it would keep me writing (and you reading) for far too long. We went to King David's tomb, the Dormition of Mary Abbey (where Mary is thought to have fallen into eternal sleep before her Assumption; it was founded by Benedictines at the turn of the 20th century), then we went to the Cenacle (where the disciples are thought to have eaten the Last Supper with Jesus and also the room where Pentecost is thought to have taken place). Then, it was off to the Western Wall just after lunch and then off to Bethlehem. 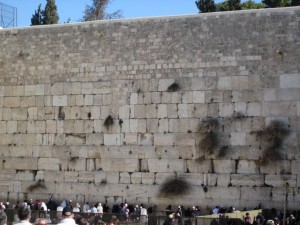 The Church of the Nativity was, on all counts, the most beautiful church yet for me. I was so surprised at how short of a drive it was from Jerusalem; the biblical distances are so clear in my head now! I was so struck by the lantern-like lamps hanging everywhere and anywhere. I bumped my head several times, but I consider it to be all a part of the experience! We touched the place where God was born into a human family. We listened as German pilgrims sang “Stille Nacht”; it was out of this world--literally. I'm sad to say that today is our last day here in the Holy Land and then it's back to Toronto (and to -20 weather--I still don't understand the Divine distribution of climates...). This trip has been an immense blessing in my life. I will try and write again before we leave as we still have the Garden of Gethsemane tomorrow and we will officially end our trip with a lengthy “catechesis” on the Church of the Holy Sepulchre. Until then, Shalom and may God bless you! +