The Short Straw Chronicles: A flight like no other!

There is much to be said about going on a pilgrimage with an open heart. Few seasoned pilgrims will admit just how dangerous this can be for fear of scaring prospective pilgrims off.  A pilgrim (especially of the Holy Land variety) runs the risk of a complete spiritual reprogramming. I feel like this might be my lot! 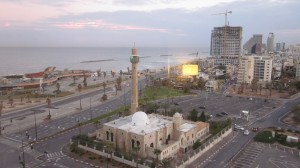 Before I even landed on Israeli soil, I was overwhelmed with the beauty and the richness of this land and of those who call it “home”. As I sought out my seat on the plane- seat 56 K (we're not talking about gold, either, we're talking plane width!) I came to the pleasant realization that this 6'4” young lady would be wedged into her place; legs folded in politely-feigned comfort for 11 hours. Make that closer to 12 (our plane had mechanical problems and take off was delayed an hour). Despite all of this, though, I couldn't have been more content. I was one plane-ride away from striking a very prominent item off of my "bucket list". Plus, I soon learned that the friendly young lady beside me--who happened to be an orthodox Jew (and her father on her other side)--were even more thrilled than I to be going “home”. Truly, this flight felt like a homecoming. After a fascinating discussion with the father about my pilgrimage and about the sites I would visit, he divulged that I would never witness a flight like the one from New York City to Tel Aviv, Israel. It's one of a kind, he'd said. I didn't know what he meant at the time but at sunrise, I would soon find out. I had already established that I was on the plane with more Orthodox Jewish people than I'd ever seen in my life. That, I had gathered from the abundance of hatboxes in the overhead cabinets. But when I awoke for my ritual leg-unfolding, I saw an initially startling -but decidedly beautiful-scene. I had awoken just in time for morning prayer. Gone were the black suits and tall hats. Now all around me were 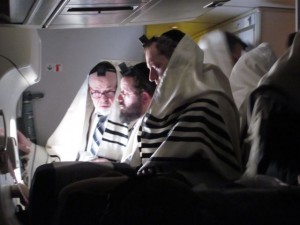 prayer shawls, swaying and whispering in Hebrew. The men stood to welcome the rising sun. They stood wherever there was room; in the aisles, in the exit rows, in front of bathrooms and... around my seat. There were dozens of them. They had opened a few window blinds and the daylight was pouring into the cabin. The men wore what looked like tiny black top hats on the front part of their head and something resembling criss-crossed black tape running up one of their arms (Tefillin). These fixtures, I was told, contain Holy Scrolls inscribed with various scriptures. Some new friends of mine--three young Jewish girls whose fathers' were participating in the ritual prayers--told me that their fathers go to the synagogues in New York City every morning to meet and pray before they head to their offices downtown. Later, one of the fathers told me that the men have regular meeting spots in downtown Manhattan that they may pray together. I was filled with a deep awe and profound appreciation for these men, our fathers in the faith, so to speak. And that was just the plane ride! While these men finished off their prayers, I opened up the Gospels to join my prayer to theirs. I imagined Jesus praying these prayers with his earthly father; trailing behind him en route to the synogogue... I now write from my hotel room in Tel Aviv. Our guide took us for a beautiful dinner followed by a 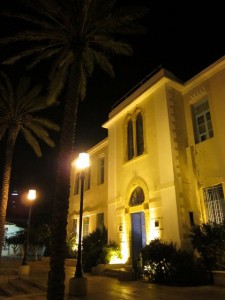 whirl-wind tour of Jaffa--the town where Jonah is said to have been spit out of the whale. This is also the town that is credited for the initial deviation from Mosiac Law, where Peter first saw the vision of the animals and was told to eat what was put before him. (Remember the vision he had of the animals descending on a blanket?) It is also the place where circumcision was nixed in order to welcome Gentiles into the fold. A revolutionary little town. As one of the ladies on our trip said: perhaps many of us here wouldn't be Catholic today if it weren't for the events that took place in this settlement on the shores of the Mediterranean. It has been a full day and I've still got lots more to write, but it's late and my itinerary suggests I might need to "suit up" for tomorrow. I look forward to telling you about it. But, in the meantime, if you'd like me to leave any prayer intentions at a Holy Site here, please let me know. I will gladly be your messenger. Shalom and good night from the Land of Jesus!