The Shoe of a Saint: Blessed are The Feet of Those Who Announce Peace 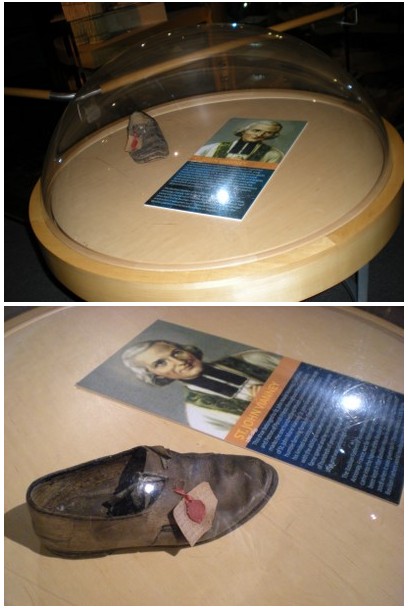 If I weren’t the Director of Marketing and Development at Salt + Light Television, I might be designing shoes. I know I dream about them a lot, and seem to have accumulated my fair share of pairs. And, I have managed to effectively pass along the shoe aficionado gene to my daughters and now granddaughters. I laugh when the two-year-old lights up when I tell her we are shopping for a new pair.
Toronto, Ontario is the home of the Bata Shoe Museum. Now some may not appreciate this gem in our midst, but as someone who has gone through the many phases of style over the past 53 years – I recall with fondness those blue, four-inch heeled, platformed wonders of the 70s, the 80s pointed, pink beauties that should be in the torture chamber museum instead, to the newest red, horse-hair, gladiator-style, strappy flats that will don my feet this summer – I appreciate that a museum is exactly where the castoffs of yesteryear’s feet must reside. Bata’s newest addition is one of St. John Vianney’s shoes. It isn’t fancy and it’s well worn, seemingly still carrying the dust over which he travelled to accomplish his mission. The shoe exactly depicts the life of this confessor; simple and austere. It is a must see, and will be on display until Labour Day amist ancient funerary sandals, Chinese silk shoes, haute couture pumps and a display of celebrity shoes. How did the shoe of this saint, make its way to the Bata Shoe Museum? It was brought directly to them from our own CEO, Father Thomas Rosica, CSB. He writes:

The Basilian Fathers of Toronto were founded in 1822 in Annonay, France, not far from Lyon and Ars. St. John Vianney’s shoe came into the hands of the Basilians in France in 1850. It had been kept in the Basilian House in Annonay until November 2008.

Father Thomas Rosica was given the shoe at this time to be held at the Basilian Fathers world headquarters in Toronto. The loan and presence of the shoe, which suggests the small stature of this exemplar of humility, is of particular significance now as 2009 marks the 150th anniversary of his death as well as the fact that Pope Benedict XVI has announced the Year of the Priest beginning June 19th -- St. John Vianney is patron of Diocesan and Parish priests throughout the world. Father Rosica shared a bit about this man’s significance:

Born of a poor farmer in Dardilly, France, this shepherd began his education late in life at the age of 20. While an ecclesiastical student he was called for military service, and became a “delinquent conscript” more or less because of illness, and hid to escape Napoleon’s police. He had difficulty learning Latin, and twice failed examinations required before ordination. Finally ordained at the age of 30, he continued his lifelong studies.

Battling many assaults by the devil, his many spiritual gifts shone through these torturous attacks. He had the power of healing and the ability to read the hearts of his penitents. He ate little and slept only a few hours each night. The frail Curé began hearing confessions at one o’clock in the morning and it has been reported that he spent from1 3 to 17 hours a day in the cramped confessional. He died on August 4, 1859, and this date remains his feast day. One humble shoe, one humble life, one huge impact on the lives of many … perhaps I should spend less time dreaming about the next pair of shoes! St. John Marie Vianney (Curé of Ars) is currently on display at the Bata Shoe Museum until Labour Day 2009. Watch for Mary Rose Bacani's episode of Catholic Focus on St. John Vianney coming this June 18th.