The Servants and the Wedding Feast this Sunday on Lectio Divina

This month on Lectio Divina, Archbishop Thomas Collins reflects on the servants and the wedding feast as found in Matthew 22:1-14. 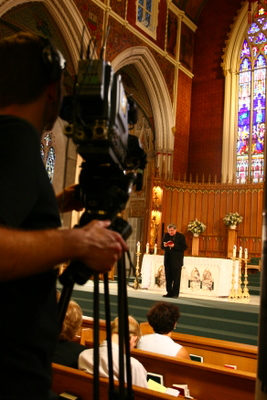 This is the dramatic parable where the king prepares a marriage feast, and invites his servants, but they refuse to come.  The Archbishop also includes the portion from Matthew 24:45-5: the passage that speaks of the wicked servant who, when his master is gone, beats his fellow servants and hangs out with drunkards... but his master comes at a time when he does not expect it! The January edition also marks a return to Vespers.  For the first four episodes this season, to help set a prayerful tone for the evening's Lectio Divina, the Archbishop presided over Compline -- the Church's night prayer.  This month, Archbishop Collins invited the seminarians at St. Augustine's Seminary in Toronto, to assist at Vespers before the actual Lectio Divina meditation.  The seminarians will continue to be part of Vespers for the rest of the year.  St. Augustine's has seminarians from a number of different dioceses, so it's nice to see our future priests! Pray our Lord’s parables, and join us for the broadcast edition of Lectio Divina with Archbishop Thomas Collins: The Parables of Jesus, Sunday, January 24th at 8:30pm ET with an encore presentation Wednesday, January 27th at 8pm ET, only on Salt + Light Television!