The Return of Perspectives Weekly: Where does peace begin?

After a long summer of brainstorming and “re-creating”, Perspectives Weekly is back in business! We are excited to showcase the fruits of our discussions and, thanks to your feedback, we have lots of fuel to keep the Perspectives fires burning well into the winter.
The suggestions we have received cover a variety of topics; some of you wanted to hear about new religious communities; some of you wanted to talk about the sex abuse crisis; some of you were concerned about how social networking is affecting our young people and our culture; others want to know why some sisters don’t wear habits. 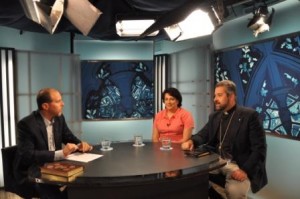 These are just a few of the all-encompassing requests we have received. But there are many more. For our first week back in studio, tune in as host Pedro Guevara Mann discusses the peace process in the Middle East as witnessed through the eyes of an Episcopalian priest living in Galilee. Father Samuel Barhoum and his family visited Salt + Light during a short stopover in Toronto to tell us about inter-faith relations in the Holy Land. This episode will serve to merely whet your appetite, however. In the coming year, you can expect a full-length documentary on Kids4Peace: a grassroots initiative launched by the Episcopalian Diocese of Jerusalem to further the cause of peace in the Middle East. Father Barhoum is convicted that to foster peace we must seek to know one another. By nourishing friendships across religions beginning in the younger generations, he believes, we will establish a true and lasting peace. This September 21st at noon, a world-wide prayer initiative for peace is being launched in honour of the U.N. International Day for Peace. The organizers, A Million Minutes for Peace, are a multi-faith movement set on “mobilizing the power of prayer”. Watch the powerful promo spot for the initiative here and pledge to join in the worldwide prayer campaign. In the meantime though, don’t forget to tune in tonight at 7pm Eastern, 8pm Pacific for the return of Perspectives. Visit us on our Facebook page or on our Perspectives page for all of the updates. See you tonight!