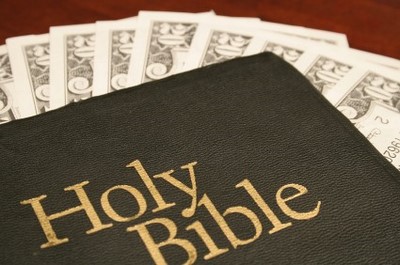 During this Lenten season we are called on to be extra generous in our material abundance. Many charities sponsor special drives and dioceses around the country make appeals for donations to support program that help feed the poor, clothe the sick and care for those in need. Indeed, The Catholic Encyclopedia says almsgiving implies a material service rendered to the poor for Christ's sake. That is an important distinction to make, especially in today's consumeristic culture which often preaches that the best way to "get" possessions is to "give." What I am referring to is a growing and popular movement called The Prosperity Gospel which will be explored and examined in tonight's episode of Catholic Focus. Although largely an evangelical phenomenon, many Catholics have been swayed by the attractive message of prosperity gospel preachers who claim that wealth, health and earthly success are all part of God's plan for our lives. All we need to do is stake our claim. Little wonder their preaching has often been called the "name it and claim it" gospel. They often ask their followers to "sow" a seed which essentially means make a financial offering to their ministry. This "seed" in turn will reap an abundant harvest. The corporate jets, opulent homes, and BMWs owned by these preachers is evidence enough to their followers that their message works. The problem is we are not always guaranteed health, wealth and earthly success. The true Gospel of Christ calls on us to "die to ourselves," to decry the things of the world and to seek the things that are holy. We give to build up the civilization of love on earth and to follow the biblical injunction that we are our "brother's keeper". The spirit of giving is not based on a heavenly lottery system where each dollar given can reap millions for the giver. On tonight's episode of Catholic Focus you'll see why a rejection of the true meaning of giving can lead us towards a gospel which separates us from the suffering of Christ and the very heart of the Lenten spiritual journey. Catholic Focus: The Prosperity Gospel airs Wednesday, March 4th at 7pm and 11pm ET, with an encore presentation Sunday, March 8th at the same times.