The pope and the ayatollah 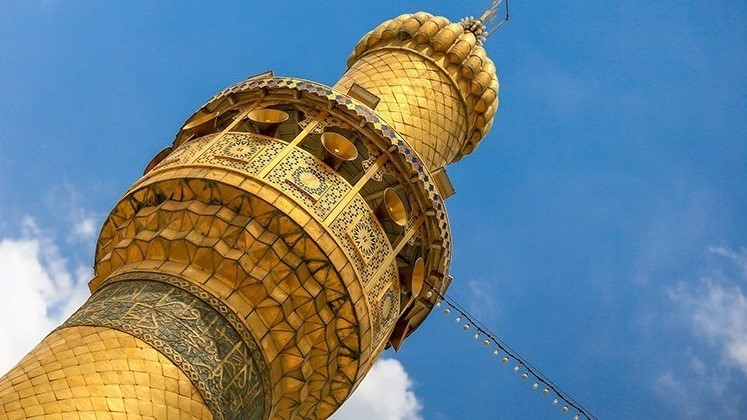 A minaret from the Imam Ali Mosque in the Iraqi city of Najaf, which is home to Muslim leader Grand Ayatollah Sayyid Ali al-Husayni al-Sistani. Photo credit: Amir Hesaminejad from the Tasnim News Agency through Wikimedia Commons, cropped and used under the terms of license CC BY-SA 4.0
It is fairly safe to assume that the name Ali al-Husayni al-Sistani (pronounced, as-sistani) is not recognized by most people in Europe and the Western Hemisphere. I suspect the first time most people heard the name it was in connection with Pope Francis’ trip to Iraq next month; the two men are scheduled to meet. However, any U.S. military or political leader engaged in Iraq after the ill-advised invasion of that country knows the name very well. Anyone involved with Shiite Islam as a religious, theological and intellectual phenomenon is also very familiar with the name. If you don’t know Ali al-Husayni al-Sistani, now might be a good time to become acquainted with him. His full title is Grand Ayatollah Sayyid (descendant of the Prophet Muhammad) Ali al-Husayni al-Sistani. He is one of the leading theologians and thinkers in Shiite Islam. Within the Shi’ite structure of theology, Ayatollah al-Sistani is at the top and has been for several decades. He is not only a Grand Ayatollah but also a marja 'taqlid, “source of emulation,” and one of the highest authorities in Shiite Islam. Born in Iran, Ayatollah al-Sistani, 90, is one of the highest religious authorities and certainly one of the most respected figures in Shiite Islam. Wikipedia notes that al-Sistani is one of perhaps only eight “sources of emulation,” or respected religious authorities, in the Muslim world. He is also listed among the world’s top hundred intellectuals. Intelligent and wise, he is representative of some of the best of Shiite Islam. Traditionally there has been a history of “quietism” among ayatollahs. On this principle, ayatollahs tended to avoid getting deeply involved in politics. This, however, did not prevent them from issuing theological decisions on political issues. It did, however, discourage them from engaging in political campaigns. Ayatollah al-Sistani has maintained this position consistently. The Iranian Revolution of 1979 brought an internal challenge to quietism in Shi’ite Islam. There has been considerable politicization of the office in Ayatollah Khomeini’s notion of the vilayet-e faqih, “rule by the jurisprudent.” Ayatollah al-Sistani, however, has not accepted the notion as a whole and expressed reservations and limitations. His stand in almost every situation can be described as “moderate.” Though born in Iran, al-Sistani has lived and taught in the Shiite holy city and theological center of Najaf in Iraq for most of his life. He can read the signs of the times and has his own website in several languages; he answers questions posed by the Shiite faithful and makes theological decisions. As a result, he is highly regarded by Shiites far beyond the confines of Iraq. In a meeting with members of a U.N. fact-finding mission on ISIS atrocities, al-Sistani denounced the “heinous crimes against some members of Iraqi society,” such as the Yazidis in Sanjar and the Christians in Mosul. For his entire career, al-Sistani has been a voice of reason and moderation and has been an example of the best of the Shiite intellectual and theological tradition. And now he is to meet with Pope Francis. The meeting could not be more important. In many ways, Francis and al-Sistani are similar. Both are trying to bring their faiths into the modern world. Both are proponents of dialogue and openness. Both often have to deal with extremism and intolerance among their fellow believers. Francis has developed close and warm relations with Ecumenical Patriarch Bartholomew of Constantinople and Sheikh Ahmed el-Tayeb of al-Ahzar. These friendships have led to common endeavors to improve the lot of human beings all over the world. Should Pope Francis and Grand Ayatollah al-Sistani also develop a sense of friendship — of fraternity — it would make a huge contribution to peace and stability in the Middle East. A bond of solidarity and fraternity between Patriarch Bartholomew, Sheikh el-Tayeb, Grand Ayatollah al-Sistani and Pope Francis would be a sign of hope to a fractured, plague-ridden world that goodness, grace — and, yes, fraternity — could really happen. This article was originally published on February 11, 2021, on the CNEWA blog and has been reproduced with kind permission by CNEWA. To read the original, click here.