The Politics of Papal Travel – The Free Speech Edition 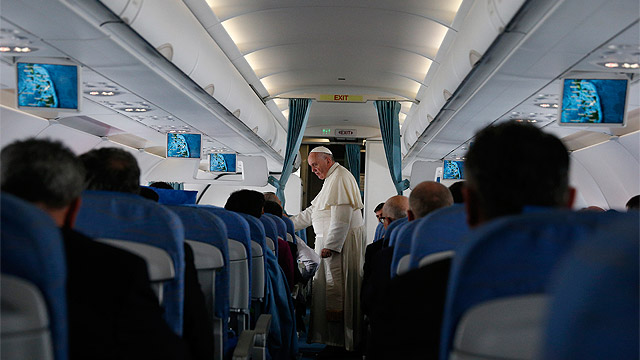 Sunday saw Pope Francis wrap up what was by all accounts, an enormously successful trip to Asia. He canonized Sri Lanka’s first saint, celebrated the single largest Mass in the Church’s history in Manila (attendance estimated to have been between six and seven million) and received nothing short of a rock star welcome everywhere he went. Yet perhaps the most curious part of the Holy Father’s Apostolic Journey was his mid-flight press conference 30,000 feet over South East Asia. While travelling from Sri Lanka to the Philippines, the pope continued his now famous habit of taking questions while in transit. As has been the case on previous flights, Francis managed to stir the world’s media into dropping sensational headlines, in this case, following a question from a French reporter:

The pope gave a lengthy response, which he summed up by saying that, “Every religion has dignity; I cannot mock a religion that respects human life and the human person. And this is a limit. I've used this example of the limit to say that in the freedom of expression there are limits…” BREAKING: Pope Francis says Free Speech has Limits The take away from headlines like these (the kind which dominated the mainstream media late last week), lend credence to the never-ending notions of the Church being married to some period of history pre-dating the Dark Ages. There is no question the media should be held to a much higher standard when reporting on the Church, however we have to be proactive in anticipating the instant headline style of journalism that dominates the mainstream. The sad reality is that in today’s globalized, tech indulgent world, news stories often boil down to 140 characters or less. Far too many today, passingly glance at a headline or quickly sift through a social media post, relying solely on the headline to form an opinion on a topic. While this may not be the case for all, it is the case for many, including millennials, and is perpetuated by the media successfully playing on our ever-decreasing attention spans. From the laity right up to the Holy Father himself, we as a Church have to consider our words so very carefully. Francis’ core message in this case was a good one: have respect for and refrain from mocking religion. However the means by which that message is framed can make or break people’s perception of what the message is. The cold hard truth is that 90%+ of the people who heard about the pope’s comments did not and will not read the full transcript of his remarks. Objectively speaking, one cannot reasonably believe that the pope is calling for enforced legislative limits on free speech. The teaching of the Church simply doesn’t agree with that. However scanning message boards and social media this past week, the aforementioned headlines fanned the fires of sensationalism and misinformation, helping spread such a false notion. Let’s take the Holy Father’s words from last week. Rather than even using the world ‘limitation,’' what if the point was reframed, instead saying freedom of speech and religion are sacrosanct as well as being tools that posses great power. Like with any great power, comes great responsibility. This requires us to responsibly use our ability to speak out so that we do not use it as a tool to incite hate and violence. Equally important is using the power of faith responsibly, to not corrupt and destroy, but to nurture and care. Pope Francis’ freewheeling press conferences are a welcome development. However they are liable to give cause for headlines that might not convey his intended message accurately. This is not to say that even the most perfect response to a question could not be manipulated into sensationalism, but it at least mitigates the likelihood. The pope gets full marks for choosing to so openly tackle this and other questions from the media. However there is an important lesson for all of us, from the laity up to the successor of Peter. The exact words we choose are now ever more critical in the world of instant globalized information, especially when conveying the message of the Church. How we frame and convey an idea is just as critical as the substance of what we are trying to communicate. Rather than dread having to come to terms with this challenge, we can embrace it and use the opportunity to even more effectively transmit our ideas, allowing for a teaching moment. No one is suggesting that delivering the message of the Church so articulately and precisely is a walk in the park; after all, all of us, even the Vicar of Christ on Earth are human. The power of Jesus’ message to the people of his day was not just its substance, but also the manner in which he delivered it. The Church’s teachings are eternal and have stood the test of time. It is incumbent upon all of us to accurately and intuitively share the message of the Church so that when we do, it is clear and consistent like a piece of crystal. NOTE: In the second press conference of this Apostolic Journey on his flight back to Rome, Pope Francis gave clarifications on his original remarks discussed in this post.