The Politics of Genocide 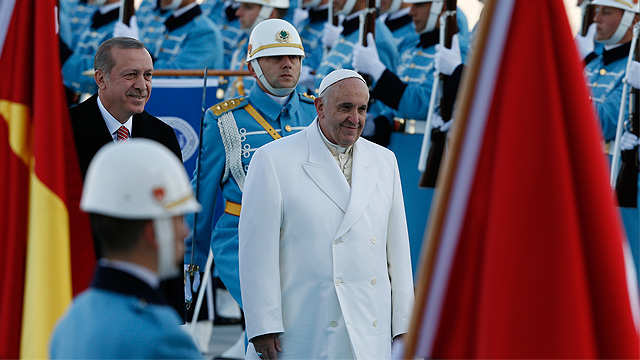 On Sunday, Pope Francis celebrated Mass in St. Peter’s Basilica for the faithful of the Armenian rite. The Armenians were on hand to see the Holy Father name one of their own, Saint Gregory of Narek, a Doctor of the Church. While not trying to draw significance away from that, or from the Mass that seamlessly wove together elements of both the Latin and Armenian traditions, there was something that overshadowed all of that.
Sunday’s Mass also marked the centenary of what the Armenians call “Metz Yeghern,” known more commonly as the Armenian genocide. It is broadly acknowledged that in the declining days of the Ottoman Empire, that entity killed as many as one and a half million Armenians within their shrinking borders, along with a host of other minority groups. It is an understandably sore spot for the descendants of those who lost their lives in such tragic fashion.
These opinions are however not universally shared. Not surprisingly, the government of Turkey, as well as modern day Turkish scholarship, regularly rejects the notion of there having been a genocide. That belief and all of the baggage that comes with it was put on full display Sunday.
During the Mass celebrated by Pope Francis, he quoted a joint-declaration written by Saint John Paul II and Supreme Armenian Patriarch Karekin II in 2001, which said, “In the past century our human family has lived through three massive and unprecedented tragedies. The first, which is widely considered ‘the first genocide of the twentieth century,’ struck your own Armenian people, the first Christian nation.”
The operative word in the statement was genocide. Immediately following the Mass, the Turkish government recalled its ambassador to the Holy See and summoned the Papal Nuncio to Turkey demanding an explanation for the remarks. In a statement released by their foreign ministry, the Turkish government said the pope contradicted historical and legal fact. It went so far as to say they expected more from the Holy See and to not give credence to “one-sided interpretations of historical events and to religious discrimination.”
Historically, nation states are never particularly eager to admit wrongdoing, let alone mass killings. However in the case of the Turks, it is not just a matter of saving face, there are very serious reasons behind the position they take on this matter. For the uninitiated, the use of the term genocide comes with a whole host of complex ramifications. It is a legal term, which within the framework of international law has tremendous consequences.
While the perpetrators of the genocide are long dead, there is precedent for countries to be held accountable for such crimes years later. To this day, Germany is still paying enormous reparations for its role in the holocaust, despite the crimes having taken place over half a century ago. Not only that, but new claims keep coming. Just last week, the government of Greece sought reparations from the Germans of approximately a quarter-billion Euros for what happened to their country during the Second World War.
There is a very real fear on the part of successive Turkish governments, that as the legal successor to the Ottoman Empire, they could be compelled by some international body to provide reparations. The potential financial costs, not to mention the political consequences for the modern Turkish state, would be nothing short of disastrous. While the growing amount of scholarship confirming the existence of the genocide makes it hard to win the moral argument, the Turks seem to be doing what they think is practical to avoid the very serious consequences of acknowledging a genocide.
There is no doubt Pope Francis knew what he was doing when he chose his words. He has undoubtedly brought closer into the fold the Armenian people, however he has risked alienating an ever more assertive Turkey under its new president, Recep Tayyip Erdo?an. It comes as no surprise that the president would have his minister speak out as forcefully as he did, given that Pope Francis is easily the highest profile figure to have acknowledged the genocide.
What kind of long-term effect this weekend’s events have on Holy See-Turkish relations remains to be seen. The relationship appeared to be at an all-time high following Francis’ visit to the 77-million strong Muslim-majority nation last year. It can be said with some certainty, that the Holy Father is unlikely to be welcome back anytime soon. However given the Holy See’s involvement as global peacemaker during the Francis pontificate, it will be interesting to see how they attempt to foster relations with the Turkey going forward.
-
Photo/CNS