After eight months with Salt+ Light, I am obviously still “learning the ropes” (and will be for quite some time). Back in June, however, I was asked to attend the World Religions Summit in Winnipeg. Upon my return, I was expected to then produce a summary piece of the meeting in the form of a Catholic Focus episode. I had abruptly reached the end of my S+L rookie-dom and thus I quickly learned that I would be learning quickly! 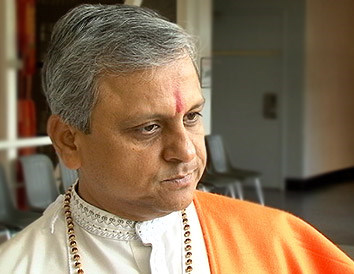 And so, on June 21st, I boarded the plane with S+L producers Kris Dmytrenko and Rita Sawaya (along with Wally Tello our seasoned cameraman) for what would be a whirlwind, multi-purposed trip to Winnipeg. The next few days were spent interviewing, writing, and shooting- but perhaps most of all- pondering my previously-held positions on development work around the world, especially in light of my Catholic faith. The meeting was host to over 80 leaders of the world’s religions from over 20 countries. The delegates hailed from a whole host of faith traditions including: Aboriginal, Bahá’í, Buddhist, Christian, Hindu, Jewish, Muslim, Shinto, and Sikh. Before leaving, I must admit, I was skeptical. I was skeptical over the effectiveness of such a meeting. I thought it would be just another round table photo-op, much like the G-8/G-20 summits are considered to be by many; the only difference being that this time the attire around the table was a bit more… expressive. I had trouble entering into the “spirit” of the discussions at first. I found that the language seemed, filtered, almost watered down. If I am honest with myself, this is mostly because this was my first prolonged exposure to devout people of other faiths and I wasn’t used to “adapting” my language for a wider, more religiously-diverse audience. I came to learn that other faiths have a something to offer me as a Catholic. Memories of photographs I’d seen of Pope John Paul II embracing Muslim leaders came to mind. I also recalled Mother Teresa’s famous reflection:

So, needless to say, I came home with a mind to read up on Catholic social teaching. As I began to go through the tapes, I reflected on my experience through Catholic eyes (the only kind I happened to have at my disposal). I found ways to weave the beautifully rich writings of our present Pope into the stories I heard on the ground in Winnipeg. I began to understand how Truth is recognized by the human heart as it is encountered. In his encyclical Caritas in Veritate, Pope Benedict writes about the individualized approach to development:

Only in charity, illumined by the light of reason and faith, is it possible to pursue development goals that possess a more humane and humanizing value…The Church does not have technical solutions to offer and does not claim “to interfere in any way in the politics of States.” She does, however, have a mission of truth to accomplish, in every time and circumstance, for a society that is attuned to man, to his dignity, to his vocation. [9]

While in Winnipeg, I heard these very same sentiments articulated in a beautiful Zambian accent while speaking with Reverend Susanne Membe Matale, the General Secretary of the Council of Churches in Zambia. She says that so often Africa is approached with aid as if it were one homogenous mass. The reality, she says, is that Africa is host to a plethora of different cultures, languages, traditions and stories! Therefore, we cannot ever overlook the dignity of the individual because as we have seen, the losses are tremendous. To learn more about the World Religions Summit in Winnipeg or about development tactics from a faith perspective, be sure to tune in to Catholic Focus: The Politics of Compassion tonight, Wednesday, October 6th, at 7:00pm ET/8:00pm PT. Or catch the encore presentation Saturday, October 9th at the same times.