Many of us are vaguely familiar with how things went for little St. Maria Goretti, but we often overlook the smaller points that make this story a particularly inspiring one. 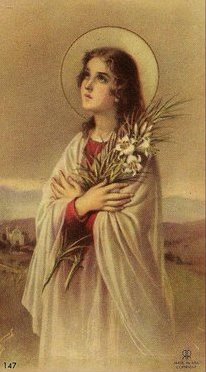 We know that she was a poor, pious farm girl. We know that only days before her 11th birthday, on July 6th 1902, Maria was attacked and murdered by 18-year old Alessandro Serenelli.  St. Maria, we also know, died because she refused to give in to the boy when he tried to rape her. The fact that St. Maria Goretti is an incorrupt saint is not surprising then given the perennial nature of her story and the potency of her humble message. No matter how rare virtue may become, St Maria’s example will always yield light and purity when we are confronted with the gray areas, especially in the realm of chastity. We often forget, though, that this story merely draws attention to an already saintly young girl. St. Maria’s mother would frequently tell her children: “You must never commit sin, at any cost.” We learn that not only Maria’s death but that also her life resonated with the same devotion St. Maria’s life was focused on the sacraments and on falling more in love with Christ. Her love for God was learned from the saintly example of her mother who encouraged the young girl to partake in the sacrament of reconciliation at 6 years old (earlier than was the custom at the time). Father Rosica wrote in a reflection on the young saint:

She had been taught by her parents the Catechism, and her beautiful soul had been educated to be aware that Christians belong to God totally, body and soul. She realized that her body was “God’s Temple” and that “The Spirit of God was living” among us (cfr. 1st Cor. 3:16) as in St. Paul’s address to the Corinthians.

Maria’s firm resolve to never commit a sin is what led her to give her life instead of submit to a sin against chastity. In the absence of her firm resolve, the story’s ending would be much less beautiful. St. Maria’s story reminds us of the power of a firm resolve, true, but her resolve did not come about from a simple one-time decision. She lived out her decision everyday and constantly renewed her love for Jesus in small sacrifices. This year, at the annual World Youth Day audience in Rome, Pope Benedict XVI told the young people that if we do not learn to say “little ‘no’s” we will never be able to say the “big no”. Clearly, Maria was no stranger to small ‘no’s. In an essay called St. Maria Goretti and her Murderer, Alessandro, James Likoudis, the former president of Catholics United for the Faith writes:

The Church, as Pope John Paul II has repeatedly reminded the world, never loses touch with martyrdom. She teaches unequivocally that no one will enter heaven who is not ready to die for Christ if the hour demands it. It is the definite meaning of the greatest of Christ's commandments: to love God above all things, more than life itself.

While in prison atoning for his crime, Alessandro had a vivid dream, so vivid, he said, that he “could not distinguish it from reality”. In his dream, his prison cell turned into a lush garden and Maria came to him bathed in light. She gave him 14 lilies (symbolic of the 14 stab wounds he dealt her years before). After he took the lilies in his hands, they turned into “flaming lights”. At this point in the dream, Maria told him that someday his soul would join hers in heaven. This was all too much for Alessandro. Until this point he had been unrepentant of his crime, but immediately his heart began to soften and he allowed himself to weep after so many years.  After 27 years in prison, Alessandro was released. A changed man, he was discharged three years early because he was considered to be a “model prisoner”. After his release, he sought out Maria’s mother that he might beg for her forgiveness. You can imagine his surprise when she placed her hands on his head, caressed his face and gently said, "Alessandro, Marietta (Maria) forgave you, Christ has forgiven you, and why should I not also forgive. I forgive you, of course, my son! Why have I not seen you sooner? Your evil days are past, and to me, you are a long-suffering son." ("The Penitent" by Pietro DiDonato- Hawthorne Books, N.Y., 1962) From that day on, Alessandro was welcomed into the Goretti family as “Uncle Alessandro”. Alessandro died at the ripe old age of 89 after years of prayer and atonement for the crime of his youth. Calling St. Maria his “protectress,” Alessandro was known to call upon the young saint frequently for her intercession.