The Paris climate conference, and after?

(Co-founder of Equiterre Steven Guilbeault speaks about what Canada needs to do to meet the challenge of climate change in the wake of the landmark climate conference in Paris 2015, at the Mary Ward Centre in Toronto, Ontario, 21/04/2016) A few dozen people gathered at the Mary Ward Centre in downtown Toronto last night to hear acclaimed environmental activist Steven Guilbeault, Co-founder of Equiterre, speak about the 2015 Paris climate summit and what Canada needs to do to meet the set goals and further challenges. In his candid but hopeful presentation, Guilbeault noted that 162 out of 196 countries in Paris agreed to tackle the climate crisis; those countries account for about 95% of all global emissions.  Today, Earth Day, will serve as a reminder to what needs to be done, as an estimated 170 countries will formally sign the COP21 agreement at the United Nations.  Now the real work begins. 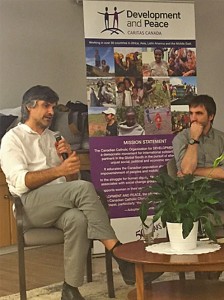 The science presented in Paris projected that no change in behavior or policy would lead to an increase in the earth's temperature by 3.6 degrees Celsius in a matter of decades.  The effects of this would be catastrophic.  Guilbeault noted that in the last global ice age, the earth's temperature was only 4 degrees colder than it is now.  The agreement reached in Paris--should it be implemented completely by every country--would limit the rise in temperature to 2.7 degrees Celsius.  While the effects of a 2.7 degree rise will be less than a 3.6 degree rise, Guilbeault said it's still not going to be pleasant for life on the planet, and much more will need to be done.  "Paris was only the beginning," he said. Guilbeault presented the numbers related to production of emissions, noting that wealthier countries will need to contribute more resources to fight climate change, not because they are wealthier, but because they have contributed more to the problem.  Statistics show that the vast majority of poorer countries have a relatively minuscule carbon footprint.  Given the grave situation of the earth and her climate, those poorer countries will need help adapting to the effects of climate change more than anything.

Looking at Canada specifically, Guibeault weighed the cost of continuing a fossil fuel driven market versus creating one based on renewable energy.  The transition, he said, is inevitable, but while Trudeau's Liberal government is much more inclined to invest in renewable energy, simultaneously expanding the fossil fuel market as they are, is a bad idea long-term for the environment, Canada's global emissions commitments, and even for jobs.  "People argue that renewable energy is not a real economy, that it doesn't create jobs.  But this is false," he said.  Rather, the numbers show that a committed investment in renewable energy will in fact produce many more jobs and limit the amount of suffering (job loss) caused by over-reliance on a boom-bust market like oil.  The low cost (demand) for oil right now and the subsequent suffering of many Canadians should kick-start our moral conscience and mobilize the country to find ways to ensure market security and workforce longevity.  The way to do that is to see what is fast and inevitably approaching: a society built on renewable energy. Ultimately, the challenge of climate change is not one of economics or technology, but of willpower and dedication.  Pope Francis calls it a moral imperative.  "Canada has the responsibility to show leadership," concluded Guilbeault, "We have to do something about it, and we have to hurry up because the clock is ticking." (Above left: Development and Peace animator for central Ontario Luke Stocking answers questions with Steven Guilbeault.  Above right: Steven Guilbeault, who participated in the Paris climate conference delivers his presentation at the Mary Ward Centre)