The Other Side of the Headlines

Around the world the front cover of almost every newspaper is dedicated to the unraveling situation in the Middle East. Last week it was Egypt, Tunisia, Bahrain, while this week the focus is Libya and the increasingly tense situation there. 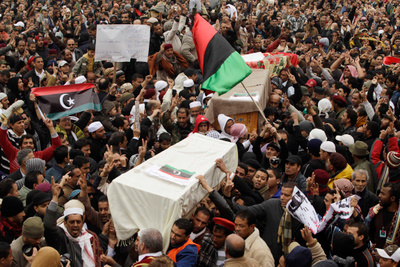 The unrest in the Middle East and Northern Africa has prompted stress in Europe. Malta, Italy and Spain have often been the first port of call for citizens fleeing North Africa. These mono-cultural countries have suffered extreme culture shock in the last 10 years as the once homogeneous cultural fabric in these nations was forced to expand to welcome people who not only look different, but speak a different language, and often practice a different religion. While some might arrive via traditional channels with legal papers, many do not. In Malta illegal immigrants have been jailed, while in Italy they are placed in "welcome centres" until a course of action can be determined. In Spain recent legalization campaigns have proved controversial with opponents claiming it would encourage more illegal immigration. Amidst the fear and apprehension, however, are those who recognize that these immigrants are fleeing from tragic situations and need to be welcomed with care and concern. In Lampedusa, Italy at least one parish priest takes the path described in the Gospels by helping house, feed, clothe and safeguard those who arrive in the Italian port city in desperate conditions after an often harrowing passage by boat. Fr. Stefano Natasi told La Bussola, an Italian Catholic newspaper:

... as recently as a few days ago up to 1000 people were arriving every night. On the island there are five thousand Tunisians, almost more than the number of parishioners who are six thousand. There was no time to waste, with the assistant pastor we opened rooms in the parish and housed them. We then asked the Ministry to re-open immediately the welcome centre and they also began sending people to other parts of Sicily and southern Italy with special flights. Then we were able to breathe a bit.

He points out that the welcome centre at Lampedusa has been empty in recent years due to a "politic of rejection." In 2009 Italy made international headlines after returning 227 Libyans to Tripoli after they were picked up by Italian vessels just off the coast of that country. The 227 people were not given a chance to claim refugee status as they never actually arrived in Italy. Just this month the Tunisian government voiced it's dismay with Italy after the Italian government proposed to deploy police to that nation to help stop the flow of people leaving Tunisia by boat for Europe. Fr. Natasi explains that these immigrants arriving illegally by boat have nothing left. They come to Italy, Malta and Spain seeking a better life and freedom. He told La Bussola most of the refugees he met were young men in their 20s and 30s. With the unrest in their homeland they lost their jobs and were forced to flee for their lives. Yet the Italian media, said Fr. Natasi, often showed images of hundreds and hundreds of refugees arriving on Sicilian shores, causing great alarm among citizens who believe the new arrivals are criminals who will put locals at risk. However, little by little Fr. Natasi manages to change the way these refugees are perceived. He has managed to build up a group of collaborators, parishioners, who work together to welcome the refugees who land at Lampedusa. That direct contact has shown local residents that these “boat people” are really just young men with hopes and dreams, trying to change their lives in the only way open to them. - Mourners carry coffins containing the bodies of Libyans who were killed in the recent clashes in Benghazi (CNS photo/Suhaib Salem, Reuters)