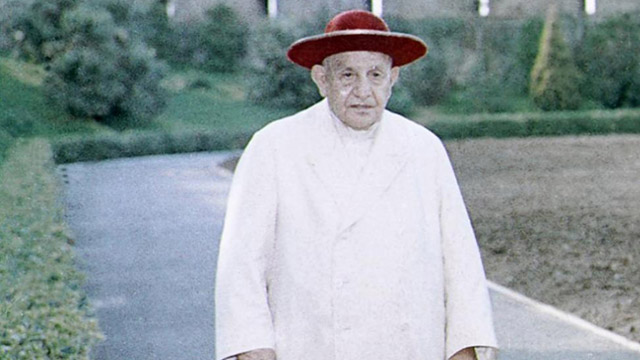 (Vatican Radio) In contrast to Pope John Paul II, whose memory is still fresh in the minds of many people, the pontificate of “Good Pope John” XXIII may seem like distant history. Pope Francis’ decision to canonize the two together has served as an opportunity for younger Catholics to rediscover the Pope who called the Second Vatican Council. Sebastian Gomes, producer for Salt and Light Catholic Media Foundation in Canada, was in Rome for the dual canonization. Born during the papacy of Pope John Paul II, Mr. Gomes spoke with Vatican Radio about Pope John XXIII and what he means for us today.   [ca_audio url_mp3="https://saltandlighttv.org/blog/wp-content/uploads/2014/05/sebastian_gomes_john23.mp3" url_ogg="" width="590" html5="true" skin="small" align="none"]

"Pope Francis, as is now typical of Pope Francis, dropped a bomb on us by announcing the canonizations of these two popes together. It’s interesting actually to see, in the first year of Francis’ pontificate, the little comments or references that he’s made to John XXIII. Obviously this is a Pope now who has a strong affinity to John XXIII. And it’s very significant. John was very different than John Paul II, but many people are noticing, very similar to Francis in a lot ways. So it’s powerful proclamation of the Church about what sanctity means and how it can express itself in many different ways. At the Basilica of Saint Peter, there are always crowds of pilgrims, not only at the tomb of John Paul II, but also at the tomb of John XXIII. So what is it about John XXIII that is so attractive to so many people? I’d say he had the same qualities that attract people to Francis. He was very simple, humble, he came from utter poverty in northern Italy. But he was also kind of casual, and comfortable in his own skin. And that kind of normality really attracts. After the long reign of Pius XII here comes this short, stocky, jolly fellow who’s just kind of brushing aside some of the protocols and doing his own thing. That kind of thing attracts people, it’s ordinary. The ordinariness is what attracts, and I think that’s the enduring connection to the good Pope, Good Pope John. One of the most enduring legacies of the Good Pope is his journal, The Journey of the Soul. John XXIII’s autobiographical story of his spiritual journey reveals a development, a spiritual growth that holiness is something that doesn’t necessarily happen overnight. It’s something that can take a lifetime.  That is an important message in a world that often looks for the quick fix, or they’re waiting for this kind of watershed moment, or a light bulb moment when it comes to religion or faith. And that doesn’t always happen. We can go to the mountaintop and some profound spiritual experience, and a lot of different movements in the Church today are promoting those kinds of things. But here’s a testament to the fact that… it’s slow, it’s difficult at times, it’s very human… So there’s that kind of slow progression in the spiritual life that is a lasting lesson that the life of John gives us. The decision to canonize Pope John XXIII and Pope John Paul II together is significant. I think Francis also understands history, he knows the ups and downs of history. I think he wants to take the Church to the next level, in the sense, not of putting the past behind us, but putting a seal on the last 50 years, and what happened at the Second Vatican Council, what happened with John Paul trying to implement the Council, and really say, these were all great gifts for the Church. Now we have to take that on the road and go forward. So it’s a lesson for us to say what is our understanding of sanctity and holiness, because both of these men had limitations. And some of those came out in the media in the few days before the canonization. And those things have to be dealt with. But Francis is saying holiness comes in many different shapes and sizes, and different proclamations and understandings of living the Gospel, or doing your best to live the Gospel.”