The numbers behind a new abortion poll

A few weeks ago I was looking for stats on Canadians’ views on abortion. It’s such a hard topic because pretty much everyone can find the right poll to suit their position on the matter.  For example, there the 2008 Angus Reid poll that shows that half of Canadians want abortion to remain legal. How do you reconcile that finding with the 2007 Environics Poll that shows that a third of Canadians support the view that human life should be protected from conception. I guess it's all about the questions you ask. 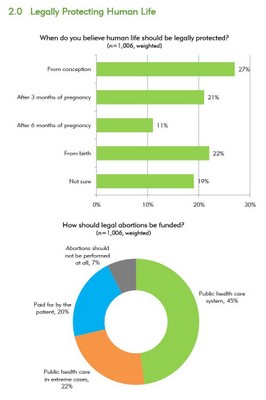 I was pleased to know that yesterday, Abacus Data released the results of a poll conducted on behalf of Sun News. They surveyed just over 1000 Canadians over the age of 18 and they asked exactly the questions that I would have asked. Let me highlight some key findings. When asked “When do you believe human life should be legally protected?” the results were: When asked about their position on abortion: Another issue that is gaining interest among Canadians is that of funding. Perhaps many of you are not aware that in Canada almost all abortions are paid for by taxpayers. In most provinces, all abortions are paid for under the publicly funded system. In New Brunswick, hospital abortions are paid for by taxpayers but private clinic abortions are not, and in Prince Edward Island, abortions are not performed in hospitals or private clinics. However, PEI does cover abortions performed elsewhere if they have been declared by a doctor to be medically necessary and have been pre-authorized and approved.  Based on the statistic that there are just over 100,000 abortions in Canada every year, and that an abortion costs $800 on average, this is costing taxpayers $80 million a year. That’s $80 million that are not going to fund other healthcare programs. But I digress… Back to the survey. On the issue of funding: Lastly, a comment that I always get is that “Canadians don’t want the debate re-opened” or “the issue has been settled.” As far as I am concerned, since there is no abortion law in this country, the issue has not been settled. In response to a question about public debate on the topic of abortion 52% of Canadians said they are not afraid of a public debate about abortion while 26% believe it is an issue that should be left alone. I guess I am among that 52% that is not afraid to have a public debate. Here is the full Abacus Data Report. And these were the survey questions:

Abortion is a controversial issue and there are many different positions and beliefs about it. 1. When do you believe human life should be legally protected? 2. Which of the following statements, if any, best represents your view on abortion? [rotate statements] 3. How should legal abortions continue to be funded: 4. Which of the following statements, if either, comes closest to your view about the abortion debate in Canada? [rotate statements]