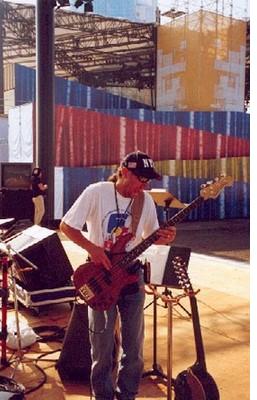 There’s something about the music of WYD2002 that really transports me back to that week. Events such as the Welcoming Ceremony, the Way of the Cross, the Vigil and the Closing Mass, would not have been the same, I believe, had it not been for the music. Not that the music is solely responsible for the impact those events had, but I can say with confidence that it certainly had a lot to do with it.
One of the events which went unnoticed was on the Wednesday night, at Exhibiton Place, Oregon Catholic Press hosted a concert featuring most of the artist from the WYD2002 Album: Lumiere du Monde/Light of the World. It was a wonderful concert and a great witness of the universal Church: artists from around the world, Mexico, Spain, Brasil, France, Chile, Vietnam, Poland, across the U.S. and Canada, came together for one purpose, with one voice. In many ways, that to me, is what WYD is all about.And I love watching these events, also so I can hear the music that I can’t listen to on the WYD2002 album, in particular: Litany by Matt Maher (Oregon Catholic Press), Adoramus te Christe by Dubois, Psalm 141: Incense Psalm by Paul Melley (not published), Il s’est Abaissé, Dieu l’a exalté by Jacques Berthier (from Taizé), Holy is His Name by John Michael Talbot and Worthy is the Lamb by Handel. And some that were written especially for the event, such as, Psalm 27: Ma Lumière et mon salut by Guy Lebel (not published) and Psalm 112 arranged by Susan Hookong-Taylor using the “Laudate Omnes Gentes” by Jacques Berthier from Taizé as refrain. Do you remember those pieces? I wish we could’ve put out another album which included these pieces.But what I love the most, is remembering all the wonderful collaborations and giving from many, many musicians and composers from across the country (and the world) who selflessly donated their gift of music. It’s great to hear from people around the world, who’ve been moved by some of this music and it’s a pleasure to have been part of making it all happen.Recently I was at the Spirit and Song website and came across something Susan HooKong-Taylor wrote on how Song of the Cross came to be. It’s was inspiring to read her words and so I leave you with her thoughts. Click HERE to read about the origins of the Song of the Cross.Happy 5th anniversary!Pedro