The Most Persecuted People on Earth 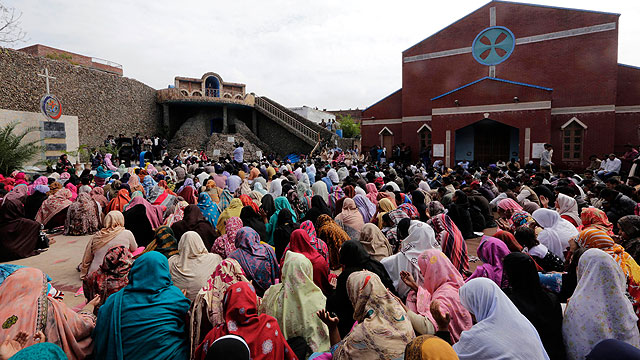 The best estimates out there suggest that in the world today, there are approximately 2.1 billion people who in some way, shape or form profess themselves as Christian. Even in a world of seven billion that’s not exactly a fledging minority; in fact it is one of the single largest demographics on planet earth. Despite that, there is no religious group facing more violence and discrimination in the world than Christians. At face value this may not seem like a reality here in the west, where we live in relative peace. However to be Christian in parts of Africa, the Middle East and in Asia means certain danger.
This weekend even Pope Francis spoke strongly against what he said was an attempt to try to hide the persecution of Christians in the world today. Three stories from this past week illustrate the physical calamities faced by Christians, and what kind of an impact this could have for the Church going forward.
Terrible news came out of Lahore, Pakistan on Sunday, as two explosions, identified by witnesses as suicide bombings killed several people going to Church. The blasts killed a combined 14 people outside of both an Anglican as well as Catholic parish. Lahore is the centre of the country’s Christian community, which is 2.5 million strong, yet only makes up 1.6% of the total population. Mass protests quickly broke out in the streets in response to the attacks. Roads were blocked and in a rare show of anger, rioting ensued with police having to disperse the people. The angry crowds expressed frustration over not just the attacks themselves, but what they say is unwillingness on the part of civil authorities to protect their communities from repeated attacks.
Being victims of violence is nothing new to Pakistani Christians, who have suffered several such assaults in recent years. Perhaps the most high profile incident involved Pakistan’s former Minister for Minorities Affairs Shahbaz Bhatti. Islamic militants assassinated Bhatti in 2011 after he spoke out sharply against the country’s blasphemy laws. He was one of very few Christians, in fact a Catholic, who had managed to get elected and hold a senior government posting. While Christians are not the only targets of the frequent violence that hangs over the country, they are high value targets. This was reinforced through a statement by the Taliban splinter group that took responsibility for Sunday’s bombings, saying the attacks would continue.
The situation this week hasn’t been all that much better in neighbouring India, where an elderly nun was violently gang-raped in the midst of trying to prevent an attempted theft. A group of eight men entered the Convent of Jesus and Mary, ransacking and committing thefts, including the contents of the tabernacle in the Chapel. Similar to Pakistan, Christian communities in India have protested in the major cities against what they say are persistent attacks against them. Like their Pakistani neighbours, they allege that the government is not protecting them and that they and their Churches, where several such attacks have taken place, are not safe.
Violence against Christians is not unique to South Asia, as the Middle East and Africa have been a focal point of the most vicious atrocities. The work of ISIS and Boko Haram is known the world over. However the question needs to be asked: who is standing up for these witnesses of faith?
With such instances becoming more and more frequent, the Vatican stepped up, chiming in far more aggressively on the topic last week. Archbishop Silvano Tomasi, the Vatican’s chief United Nations representative in Geneva, said in an interview that if a diplomatic solution cannot be found soon in Syria and Iraq, that military intervention would be necessary. He even termed the work of ISIS genocide, which is an increasingly accurate account of what is taking place. Seldom does the Vatican promote intervention, frequently advising nations to seek diplomatic solutions to their disputes. What is perhaps most telling about their statement is the use of the term genocide. In diplomatic speak, this is a very heavy handed term, one that according to international law, not simply suggests, but compels nations to take military action. The Vatican would not have used such a term without knowing precisely what it was suggesting.
Violence against anyone at anytime is never acceptable. Personal freedoms such as the rights to assembly and of religious liberty should be universally respected. However in different parts of the world, we see people facing physical danger for their faith far too frequently. We see so much public outcry for far lesser causes, which is why we must never falter in our resolve to build a world where such violence does not exist. As mentioned earlier, Pope Francis acknowledged this point in a very direct tone. This compels us all to educate as many people as possible to these realities.
Many of the most violence genocides in history have happened cloak and dagger with the world not acknowledging them until well after they were over. Yet here we are in the 21st century, a globalized world where news and information is instantly accessible. Let us not allow another silent atrocity to occur whether it be quick and on a public forum, or slow and under the veil of secrecy. Let us not allow violence against Christians to become a defining part of the age we live in.