The Message of The Divine Mercy 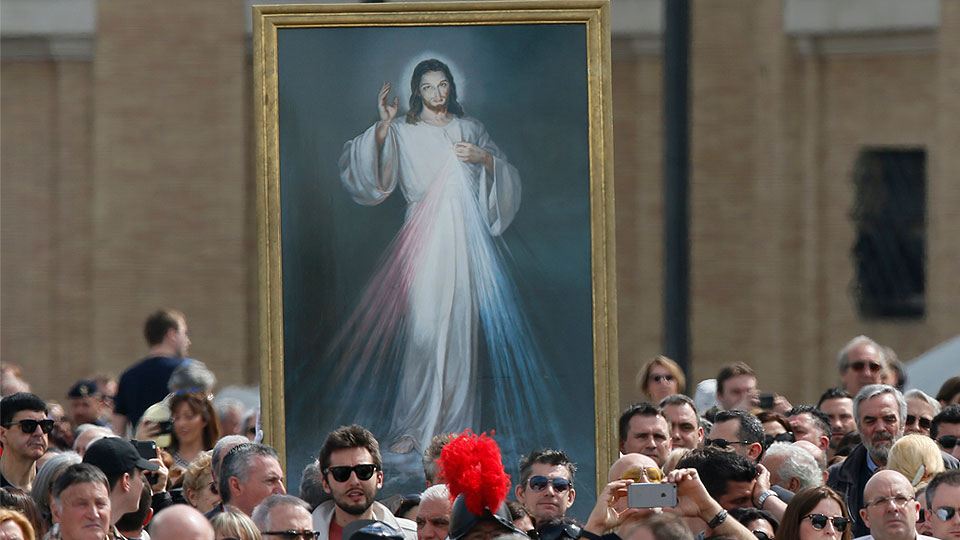 CNS photo/Paul Haring
On May 23, 2000, Pope John Paul II granted the Universal Church the Feast of the Divine Mercy to be celebrated on the second Sunday of Easter each year. Since then, The Divine Mercy has become one of the fastest growing devotions in the Church, especially among young Catholics. This year, Divine Mercy Sunday will be celebrated on April 23rd. The Message of The Divine Mercy Based upon St. Faustina Kowalska’s record of the revelations she received from Jesus in 1931, the message of The Divine Mercy can be summed up in one sentence: Jesus, I trust in you! Christ as The Divine Mercy instructs us to approach Him in prayer to ask for His mercy, to let His mercy flow from us to others, and above all, to trust completely in Him in order to truly experience the graces of His mercy. A “Mercy-filled” Video Series While there are many resources which speak to the message of Divine Mercy, most focus on the life of St. Faustina and Jesus’ message as he revealed it to her. While those resources certainly help us understand the devotion, what is perhaps even more compelling are the many stories of people who have had profound conversion experiences because of The Divine Mercy message and image. During last year’s Jubilee of Mercy, the Knights of Columbus produced a video series to tell just those kinds of stories. The #MercyStories micro-series shines a light on Catholics whose lives have been transformed by their devotion to the Divine Mercy message and connects their stories to the life of St. Faustina and the message Christ gave her. At just about 5 minutes per video, this series offers powerful stories of witness you can watch at anytime. Since the video series was launched in 2016, it has reached more than 1 million people on Facebook alone. #MercyStories: Lives Transformed The flagship video in the #MercyStories series follows Fr. Donald Calloway on his journey from a drug-runner to parish priest. A convert to Catholicism, Fr. Calloway dropped out of high school, was institutionalized, and spent time in jail before coming to Christ. In his episode of #MercyStories, he recalls the first moment he prayed before The Divine Mercy image and realized he was wanted and loved by Christ. Soon after, he entered seminary and was ordained to the priesthood in the Congregation of Marian Fathers of the Immaculate Conception. Another highlight of the series is the episode featuring Jennifer Trapuzzano’s incredible story. A newlywed expecting her first child, Jennifer’s life changed forever when her husband Nathan was murdered. As she prepared herself to give a statement in court, she looked for a way to truly forgive the man who killed Nathan. She began to read the diary of St. Faustina and developed a deep devotion to The Divine Mercy which allowed her to publicly offer forgiveness to her husband’s murderer. Both of these videos, and the entire series for that matter, serve as an example that the ability to show mercy and to receive mercy, even the most extreme cases, is possible. The Message of Divine Mercy is real and spreading. I highly recommend sharing these series with the people in your life who are in need of hope and mercy. Wouldn't that be everyone?