The making of Alma Mater 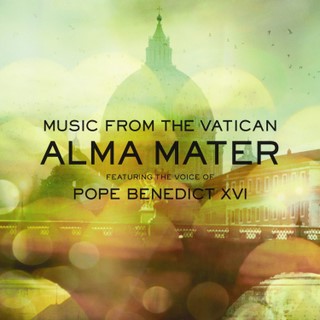 You may have heard that Pope Benedict XVI recently released a CD... sort of. Geffen Records, with the help of Vatican Radio, produced an album of Marian chants and Lauretan Litanies. Woven into the music are clips of Pope Benedict's reflections on Mary.
The second to last track on the CD is actually built around a recording of Pope Benedict singing the entire Regina Coeli prayer. The disc also features the choir of the Rome Philharmonic Academy led by Monsignor Pablo Colino, director emeritus of Music for St. Peter's Basilica, and London's Royal Philharmonic Orchestra. Geffen Records, which produced the album, has put together a half hour special about the making of this historic CD, which was recorded partly in St. Peter's Basilica and party in London's Abbey Road Studios. (Yes, the Italian executive producer of the album had his picture taken on the famous Zebra crosswalk infront of the studios.) Salt + Light Television is pleased to bring you this special behind-the -scenes look at Alma Mater. Tune in Sunday, December 13th at 8:30 pm EST for "Alma Mater: The Making of a Masterpiece".