The Magic of WYD 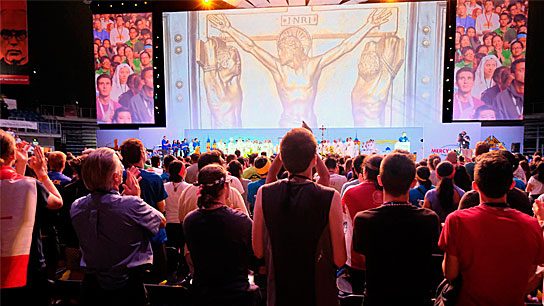 Written by Ian Meaden
I spent the past couple of days trying to think of an interesting aspect of World Youth Day to write about, namely because there is so much I could talk about. There is so much going on all the time. For those reading this blog who may not know, World Youth Day is an opportunity for Catholic youth from around the world to come together in a single nation every three or so years for the singular purpose of praising God and celebrating our rich and beautiful Catholic faith. 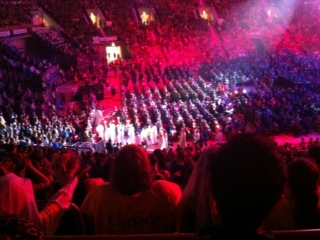 It is easy to get caught up in the hustle and bustle of World Youth Day, moving from one event to another, navigating the Krakow transit system (especially hard when your Polish is all but non-existent), finding stations, taking in Youth Festival events, as enjoying the overall social atmosphere and awesome fellowship of the entire pilgrimage. How many times in your life will you high five a group from Argentina and then sing with a group of Italians right after? However, we can not lose sight of the reason for why St. John Paul II inaugurated World Youth Day.
For me, the moment came Wednesday night at an event called "Mercy Fest". This event involved Matt Maher (pride of Newfoundland) and Audrey Assad, leading 18,000 plus pilgrims in praise as worship then, quite possibly, one of the singular actions that left me awestruck occurred when the procession came out from under the bleachers with Bishop Robert Barron carrying the Blessed Sacrament in a giant Monstrance. At that moment, 18,000 pilgrims fell to their knees in Adoration of our Blessed Lord. What a moment! For the next hour and a half, we worshipped the Lord in song with the Blessed Sacrament on stage. 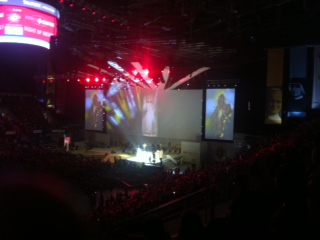 Most of the lights in the Tauron Arena off with the bright white spotlights solely on, you guessed it, the Monstrance, the reason why we are here!
Now, personally speaking, it was quite the ordeal to get to the Arena, and for a period I did not think I would get in. There were so many people who wanted to partake in "Mercy Fest" that they were actually turning people away at the door. With the majority of my group (St. Joseph's Basilica, Edmonton, Alberta, Canada) squarely inside, I was outside at the start waiting patiently and quietly in line; sitting while most were standing. I was sitting (I'm lazy) just reading my book. When the doors opened again to allow people inside, there was nearly a stampede around me. Thankfully, another group from the USA noticed that I was there first and quite patient and made sure I entered. I will add, the reason why I was late is because I was at Wawel Castle to see Pope Francis arrive. Now, I was only in area by sheer luck or Divine Mercy (I was actually in a mission to find WYD English prayer books for my group). I noticed the crowd gathering along the road and surmised it had something to do with His Holiness. Now, most of barricades were a good ten people deep, so me being me (and those who know me will attest that I tend to do stupid things without thinking) climbed up a 10-12 foot hill, stood at the top holding the branches of a bush so I didn't fall backwards while waiting for the Popemobile to arrive.

As he arrived, and witnessing how close I was as the Popemobile went by, made my poor judgement fully worthwhile. It was at that point I made my way by Tram to Tauron Arena to meet my group.
World Youth Day is not just a pilgrimage, it is an encounter with The Lord. We witness that with Pope Francis. We witness that when we adore the Blessed Sacrament. We need to use this as an opportunity to grow closer to God, and allow God to grow close in us. As Cardinal Tagle said in his catechesis to us, we need to allow God to touch our hearts.
Photo credits: Bill Wittman and Ian Meaden