The Importance of Being Family 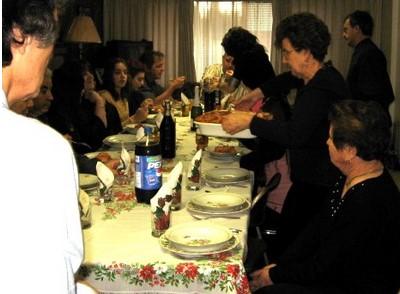 I picked up a few bad habits in Journalism school. One is that I have two cappuccinos before 10:00am and the other is that every morning the first thing I do is turn on the news. The former gives me a jolt of energy, the latter sometimes has the ability to give me the shivers. This morning, unfortunately, I got the shivers. The breaking news on all the morning news shows was the tragic shooting in Finland that left ten young people dead, plus the gunman. This is a story we've seen before in Canada, in the U.S., and once before in Finland. One lone gunman who, for whatever reason, can't stand the sight of people anymore decides to take his rage out on innocent peers. Then faced with the enormity of his act he tries to take his own life. How did we get here?
I can't help but think of a recent homily I heard in which the presider spoke about our generation's lack of father figures and how that lack of a father profoundly impacts the young person. In fact, one can usually tell by a person's way of being, carrying themselves, expressing themselves, that they've missed out on something in their lives. I recalled a seemingly long-ago summer during which I worked as a Day Camp leader in a diverse neighbourhood in Vancouver. By the end of the summer I could identify by their behaviour (or behavioural problems) which kids came from two parents families versus one parent families or other unique situations. While it seems clear that fatherless-ness has a profound impact on today's young people, (although many would try to argue against that) I don't think that quite explains how we get from hyperactive kids to gun-wielding college students. I think the fatherless-ness is a symptom of something far wider: Familyless-ness.When I moved across this enormous country of ours to join the Salt+Light team I left behind a small village worth of people who from my very first breath had a part in shaping who I am today. I just didn't realize that until I was without them, 3300 kilometers away. I set up my new home "my way" and then stepped back and caught the shadow of all the Ambrosio women (and men) before me who had set up their homes the same way, long before I existed. My daily and weekly rhythms, I found, mirrored the rhythms that surrounded me growing up. Food was prepared the same way it has been for generations before me -- and woe betide anyone who dared do things differently. I even found myself shopping for the same laundry soap so that my clothes would smell like they did when my mother used to wash them. My first thought was, "The worst has finally happened! I've turned into my parents!" Yet it was exactly these things that were rooting me and giving me the security I needed to face the adventure of starting over in a new city and a new job. I was fortunate, I realize to be blessed with a family with a strong sense of unity, a family that simply doesn't know anything other than unity. A family rooted in values that sadly, seem to be going the way of the Dodo bird. I can't help thinking, what would I be if my family were not the united front of love and guidance I appreciate only now?My thoughts turn toward the gunman in Finland. No, I'm not saying I would be in his shoes, but I see how going through life without a "village" of people to turn to, to love you unconditionally, could leave a person suspended in mid-air, feeling like there is no safe place on earth for them, no comfortingly familiar pattern to turn to, no allies, no respite from life's harshness, no context to their own being. Wouldn't this drive you to insanity? I've discovered that in the absence of my own family I have a tendency to create a "pseudo-family" around me, made up of friends and kindred spirits. What happens, though, when one doesn't have a family to miss? When one doesn't have a family "blueprint" they can use to build a "pseudo-family". Or worse, what happens when one lives in a seemingly normal, traditional, nuclear family that is simply non-functional and can't provide any emotional security or guidance? I suspect this is how we end up with morning newscasts featuring the latest college gunman's rampage.The only thing we can do today is pray for the victims of this latest gunman's rage against the world and pray that a few young people will understand today the power of a solid family and do whatever they can to make sure their own families become a source of grounding, identity, love and security. Maybe, just maybe, if we stand up and take notice of what these enraged gunmen are trying to tell us, we can change the world -- again.