At Mass in Porto, Pope invites faithful to become witnesses of Christ's resurrection

The city of Porto was the last stop on Pope Benedict XVI's Apostolic Voyage to Portugal. Porto is located in the north of Portugal and is the  country's second largest metropolitan city  after Lisbon. The Holy Father arrived at the airport via helicopter this morning from Fatima where he was greeted by the Bishop of Porto, Bishop Manuel Clemente and several local dignitaries. A group of almost 100 children welcomed the Pope with the official welcoming hymn. 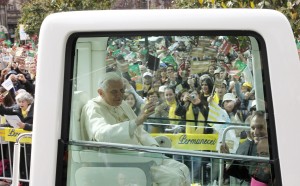 En route to celebrating Mass in the city centre, the Popemobile crossed the Infante Bridge over the River Douros.  Hundreds of boats were docked along the river,  sounding their sirens in salute to the Pontiff. Pope Benedict then arrived in the Historic City Centre  which is a Unesco World Heritage site. He was greeted there by the Mayor of Porto, Rui Rio, who presented him with the keys to the city, along with a special anthology containing verse and prose on the Harbor of Porto. He celebrated Mass at the Avenue dos. Aliados (which translates in English to Allies).  There were 200,000 gathered for the final event of the Pope's visit. The atmosphere was very lively and enthusiastic, a contrast from the more serene and prayerful two days in Fatima. In the Holy Father's homily he encouraged the people of Portugal to fulfill their duty to Christ and live as missionaries, declaring the Gospel in their society.   He also implored those present and watching to live the Gospel and evangelize in their own Catholic society, not paying sole attention to evangelizing non-Christians and people in far off lands.

From its origins, the Christian people has clearly recognized the importance of communicating the Good News of Jesus to those who did not yet know him.  In recent years the anthropological, cultural, social and religious framework of humanity has changed; today the Church is called to face new challenges and is ready to dialogue with different cultures and religions, in the search for ways of building, along with all people of good will, the peaceful coexistence of peoples.  The field of the mission ad gentes appears much broader today, and no longer to be defined on the basis of geographic considerations alone; in effect, not only non-Christian peoples and those who are far distant await us, but so do social and cultural milieux, and above all human hearts, which are the real goal of the missionary activity of the People of God.

As Catholic News Service Rome Bureau Chief John Thavis pointed out in our live coverage, and as he writes in the following article, his stressing of mission and re-evangelization may be a way of preparing the faithful for the announcement, expected in the next couple of weeks, of the formation of a "Pontifical Council for the New Evangelization." Below is the full text from Pope Benedict XVI's Homily:

HOLY MASS HOMILY OF THE HOLY FATHER Av. dos Aliados Square, Porto Dear Brothers and Sisters, It is written in the book of Psalms, … ‘His office let another take’.  One of these men, then […] must become a witness with us to his resurrection” (Acts 1:20-22).  These were the words of Peter, as he read and interpreted the word of God in the midst of his brethren gathered in the Upper Room following Jesus’ ascension to heaven.  The one who was chosen was Matthias, who had been a witness to the public life of Jesus and his victory over death, and had remained faithful to him to the end, despite the fact that many abandoned him.  ... Continue Reading 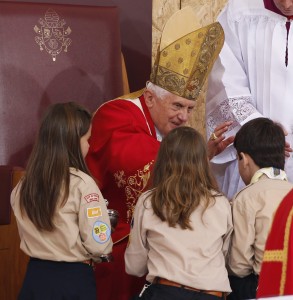 At the conclusion of Mass, the Holy Father went to the balcony of the municipal building to greet the pilgrims.  While on the balcony, university students presented two very interesting gifts to the Pope. The first gift was a special t-shirt that electronically monitors heart rate and stores data in box which is kept in the pocket. The second gift was a light-weight guitar made entirely of carbon-fibre (while the Pope is known to play the piano, his abilities in regards to guitar are unknown!). The gifts are demonstrative of the technological advances in Portugal, and were a youthful alternative to the traditional gifts the Pope receives. He also blessed the first stone of the new Redemptoris Mater Diocesan Missionary Seminary which will be constructed in Porto.