Pope in UK: The Heart of the Pope's Trip to the UK 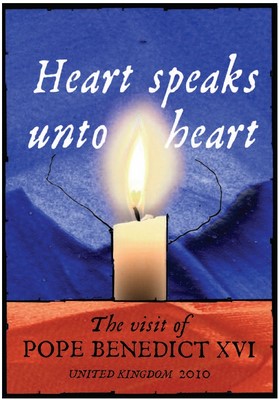 That was announced last week as the motto for Pope Benedict XVI's September visit to the UK. The phrase is an appropriate one -- it's the motto on the coat of arms of Cardinal John Henry Newman. The Holy Father will beatify Cardinal Newman on the final day of his Apostolic Journey. The Bishops Conference of England and Wales also released a 32-page booklet, The Pope in the UK, for parishes across England, Wales and Scotland. It offers 10 Q&As about the Holy Father's visit, ranging from  "Why is the Pope meeting the Queen?" to "What is the Catholic contribution to British society?" The president of the Conference, Archbishop Vincent Nichols of West Minster, said they wanted the booklet to answer questions for the curious in an accessible and intelligent way:

It is an attempt to get beyond the immediacy of headlines and make available the immensely rich tradition of the Church in dealing with the dilemmas of human life that Pope Benedict so eloquently expresses. We are looking to spell out the richness of Catholic tradition and also the enormous contribution of the Catholic Church to this country and around the world. It is important to explain who the Pope is so people can better appreciate this historic visit.

The full itinerary of the September 16th-19th trip will be published in July. Stay tuned to Salt + Light Television in the fall for full coverage of the UK visit. For more on the motto, logo, and booklet, visit the UK's official Papal Visit page HERE.