The Halifax Explosion: A Story of Christmas Giving 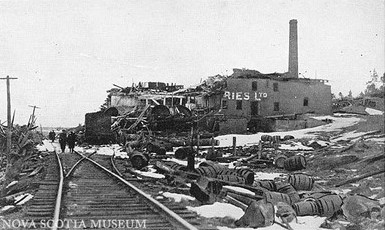 The Advent season brings with it the occasion to reflect on the meaning of the season. Just recently I learned about a tragic episode in Canadian history which reveals how the spirit of giving can triumph over the darkest moments in our lives. On Thursday December 6, 1917 two ships collided in the port of Halifax. One of the ships involved in the collision, the French vessel SS Mont Blanc was carrying explosives and munitions bound for Europe, which was immersed in World War I. The ship was badly damaged and was ablaze as it floated into the harbor. Hundreds of Haligonians, unaware of the deadly cargo, crowded the docks to watch the ship burn. As the crowds looked on the SS Mont Blanc suddenly exploded in a blinding white flash. It was the largest man made explosion prior to the atomic bomb. Nearly 2,000 people were instantly killed, 9,000 were wounded and almost the entire north end of Halifax was destroyed. The force of the explosion could be felt as far away as Sydney, Cape Breton. Halifax was immediately thrust into an unprecedented emergency situation. There were too few hospital rooms and insufficient medical supplies to assist the wounded. The crisis was compounded by the fact that the day after the explosion Halifax was hit with a blizzard which dumped more than 30 centimeters on the already leveled city. It was shaping up to be the saddest Christmas season in the history of proud Nova Scotia. However, the silver lining in the “Halifax Explosion” was the relief efforts of many friendly nations and agencies. The most comprehensive assistance came from the state of Massachusetts. Ships traveling from the Port of Boston brought immediate relief in the form of medical staff and supplies, food, clothing, transport, and even glass and glaziers as the force of explosion had destroyed nearly all the glass windows in Halifax. 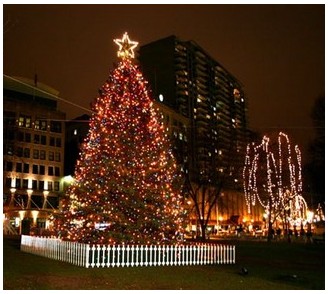 Haligonians celebrated a subdued Christmas in 1917, but the gifts they received were never forgotten. Every year Halifax presents Boston with a giant Christmas tree reminding them that their help in December 1917 will never be forgotten. Nova Scotia’s annual gift has become Boston's official Christmas tree. Its televised lighting each year is seen by millions throughout Massachusetts and followed closely by millions more in Nova Scotia. The history of this encounter between Bostonians and Haligonians during that tragic month in December 1917 shows us that each act of giving this season can inspire gratitude and goodwill decades later. In the words of Winston Churchill: “We make a living by what we get, but we make a life by what we give.”