The Great Saints (and Angels) of the Week 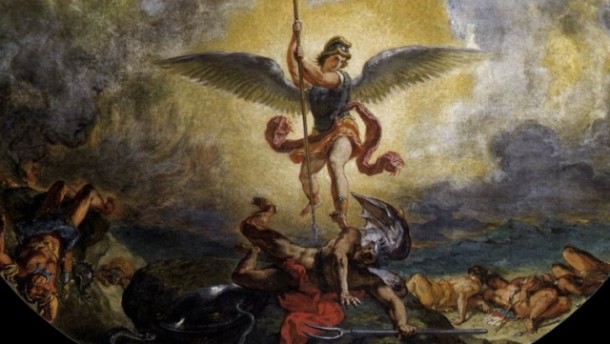 Today we celebrate the feast of the Archangels -- St. Michael, St. Gabriel, and St. Raphael. Take some time today to look up  Scripture references to the different Archangels and meditate on the work of these heavenly messengers. For St. Michael flip to Revelations 12 (there's also references in Daniel 10 and 12), St. Gabriel of course can be found in Luke's Nativity story, and St. Raphael is featured in the Old Testament's Book of Tobit (12).

Tuesday, we recognize on St. Jerome (c. 347-420), the great doctor of the Church perhaps best known for his for his translation of the Vulgate. A Biblical scholar, Jerome wrote in his Prologue to the "Commentary on Isaiah "Ignorance of the Scriptures is ignorance of Christ." Here's a reflection given by Pope Benedict during a General Audience on St. Jerome's love for Sacred Scripture.

On Wednesday we have a saint who has a great following, a heroic woman who though living as a cloistered nun has become patroness of missions -- St. Thérèse of Lisieux. One of three female doctors of the Church, the Little Flower is an outstanding model of humility and her autobiography "Story of a Soul" is a must-have spiritual classic. Her parents, Louis and Marie Zelie Guerin Martin, joined her officially in the Communion of Saints when they were beatified on October 19, 2008.

On Thursday we return to the Angels and recognize our Guardian Angels. In the Catechism of the Catholic Church we read: "From infancy to death human life is surrounded by their [angels'] watchful care and intercession. 'Beside each believer stands an angel as protector and shepherd leading him to life.' Already here on earth the Christian life shares by faith in the blessed company of angels and men united in God." (CCC 336) It's funny, we often pray to our favourite saints, but do we remember our Guardian Angel? Today is a good day to begin developing our relationship with our constant companion. Though we don't celebrate a saint's day in the universal calendar on Friday, there is the popular First Friday devotion.

The Church celebrates another one of her favourite sons on Saturday, St. Francis of Assisi, namesake of Pope Francis. From reform to establishing religious orders, St. Francis' contribution to Catholicism is vast and impressive. The Saint is associated very much with peace -- from hymns to Days of Prayer in Assisi. While visiting Assisi in the summer of 2007, Pope Benedict reflected on the saint and peace -- here's his address. Wow! It is truly a week of holy men, women, and angels! Why not make an effort this week to get to know some of this great pillars of our faith better?   This post was originally published in 2008.