The gifts John Paul II gave at his beatification 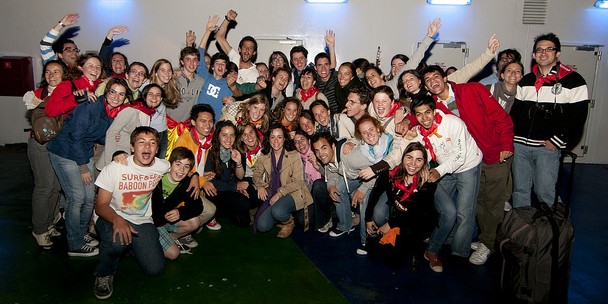 Today we remember the beatification of John Paul II. As with everything related to John Paul II, everyone has a memory and a story related to this day. One year ago I was living in Madrid, working for World Youth Day. The announcement of his beatification was made on January 14. I had just arrived in Madrid and was at a meeting with youth ministry delegates from around the world. With the announcement of the beatification it was only natural that John Paul II would be included in the list of patrons saints of World Youth Day. An official delegation would represent WYD at the beatification, but that delegation was small. The rest of the staff and volunteers decided a full on pilgrimage was needed, and no one would be excluded. So it was that I found myself driving with 600 other people from Madrid to Barcelona. In Barcelona we picked up more pilgrims and boarded a ship that would take us across the Mediterranean, to the port of Rome just in time to drive into the city for the prayer vigil the night before the beatification. I have to admit I was apprehensive at the start. So I took refuge behind my camera. Through the viewfinder I saw one of my colleagues, Luis, who was undertaking the pilgrimage with his six siblings, ranging in age from six to 26. There was Cristina, a Madrileñan who volunteered part-time for WYD as a photographer. We sat together comparing shot composition and fretting over the storm that was forecast for May 1 in Rome. I told her about how at WYD Toronto a storm was forecast but JPII blessed the sky and soon enough the skies cleared up and his helicopter was able to take off. There were Paola and Kasia, a Taiwanese and a Polish volunteer who quickly became best friends despite coming from two very different worlds. The overnight boat trip also gave me a chance to get to know Elsa, a Mexican-Australian-Canadian who had taken a sabbatical from her job in Australia to figure out what God wanted from her at this point in her life. JPII wasted no time interceding on her behalf. She went on the pilgrimage ready to enjoy a once in a lifetime weekend with her new WYD friends. The voyage gave her a chance to get to know one of her colleagues in particular - a dashing man named Antonio, whom she believed was unavailable. The 22 hour boat ride provided ample time for conversation and the discovery that he was very much an eligible Catholic bachelor, although he did have two young daughters. Once we arrived in Rome and bunked down for the evening inside the Church of San Giovanni dei Fiorentini along with hundreds of other pilgrims, Elsa curled up in her sleeping bag alongside Antonio’s 11 year old daughter, and nodded off. Antonio stayed up praying the rosary I had passed him as part of the perpetual rosary our group had started. Antonio later confessed, “that was the night when something started, something stirred in my heart as I sat there praying, and watching over my daughter and Elsa.” WYD staffers considered this John Paul II’s first miracle as patron of WYD Madrid. Elsa and Antonio are getting married this month in Madrid. The one miracle JPII couldn’t perform was getting us to Rome on time. A delay in embarkation in Barcelona and choppy waters en route delayed us enough that we missed the prayer vigil at Circo Massimo. Instead, Elsa, Antonio, Antonio’s daughter, myself and Cristina spent the evening watching pilgrims from around the world pray, share memories of John Paul II, wait in joyful hope for the first signs of dawn…when the plaza would open to the public. I only spent a couple hours in the church, I had to be at the entrance to the media gallery at 5am along with the rest of the world’s media. With no sleep I managed to get myself safely into the media gallery. High above St. Peter’s I watched the sun come up over the Tiber, over Castel Sant’Angelo, and light up the façade of the basilica. It was also there, under a blazing sun (another JPII intervention) that I watched the fabric covering drop from the official portrait of John Paul II and strains of Totus Tuus rise from the choir and congregation as he was declared blessed. One year later there is a group of one-time pilgrims scattered around the world who will stop today to remember that weekend of traveling and give thanks - not only for the beatification of a man we consider a saint, but also for the gifts that man gave us in his own unique way. --- Photo by Cristina Rodriguez, courtesy of WYD Madrid 2011