The Future Depends on Love 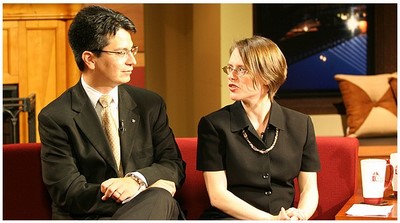 Quite often I get comments from people about the state of marriage in our society - with one in two marriages ending in divorce and teenage pregnancy rates up for the first time in 15 years. It seems that sexual immorality, adultery, and abortion are becoming more and more prevalent. People are concerned. As a parent, I am concerned about the messages that young people receive from the media and their peers regarding sexuality and marriage, and have to figure out how to present the right message to my children.Thanks to our partnership with CatholicTV, Salt + Light Television presents a new show on marriage called The Future Depends On Love. Hosted by Doctors David and Angela Franks (who are both professors at St. John’s Seminary in Brighton, MA, and serve as the co-directors for the Master of Arts in Ministry program for laity), the show arises from the Future Depends on Love Marriage Initiative, which is a project of the Catholic Bishops of Massachusetts. The show aims to educate and inspire Catholics about the vocation of Marriage and its importance in the Church and in society.“The Future Depends On Love” examines issues such as the sanctity of marriage, chastity, natural family planning and related topics, and features a variety of guests, from Catholic bishops to prominent speakers, who sit down with the hosts to discuss the importance of the vocation of marriage. Guests include Cardinal Seán O’Malley, Bishops McManus and McDonnell, Chris Godfrey- former New York Giants Super Bowl Champ and author of a chastity curriculum for teens, as well as college-aged chastity speakers.Tune in to watch “The Future Depends On Love” every Tuesday at 8pm ET and together with Drs. David and Angela Franks let’s begin to build a better world, one built on the culture of love and life.