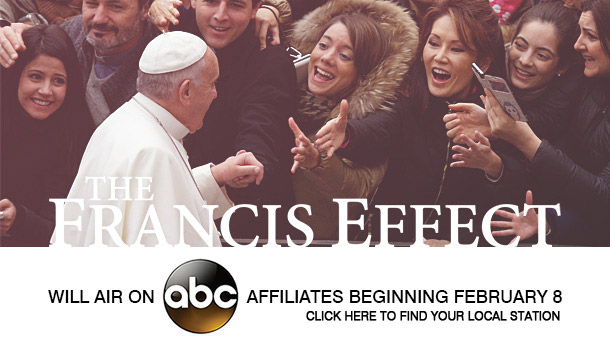 Through a special partnership with the Interfaith Broadcasting Commission and ABC Television Network in the USA, Salt and Light Catholic Media Foundation is pleased to announce that their 2014 documentary “The Francis Effect” will begin airing on close to 250 ABC affiliates beginning on February 8, 2015.  A special 58-minute version of the original 75-minute production was edited for television broadcast on ABC Television Network. The documentary will have a broadcast window of six weeks. Those interested in watching the documentary should consult their local TV guides to determine broadcast times in your area during the broadcast period. The documentary is very timely as it coincides with the second anniversary of the historic transition in the papacy of 2013 that culminated in the election of Argentine Cardinal Jorge Mario Bergoglio as Bishop of Rome on March 13, 2013. Brief Synopsis of Documentary What has happened in the Church, and how can it be that a 77-year-old, retirement-bound archbishop from Buenos Aires has captivated the world? Is this all the work of a public relations company or clever media strategists hired by the Vatican and frantically working behind the scenes to re-brand its image? Or is there some- thing else at work? On March 13, 2013, Jorge Mario Bergoglio received the call in the Sistine Chapel to go, rebuild, repair, renew and heal the Church. There are those who delight in describing the new Pope as a bold, brazen revolutionary sent to rock the boat. Others think he has come to cause a massive shipwreck. But the only revolution that Pope Francis has inaugurated is a revolution of tenderness, the very words he used in his major letter, The Joy of the Gospel. (Evangelii Gaudium, 88) It wasn’t long into the pontificate of Pope Francis before we knew this one was going to be different. The spontaneity of his words and actions and his down-to-earth style generated unprecedented and overwhelmingly positive global attention. The Francis Effect takes a critical and in-depth look at how the Catholic Church is rapidly changing under the leadership and vision of Pope Francis. The film begins by situating the pontificate of Francis in a wider historical context, referencing an essay written by the German theologian Fr. Karl Rahner, SJ—one of the most influential Catholic thinkers of the 20th century. Rahner proposed that the Second Vatican Council of the 1960’s was the beginning of a fundamental transformation of the Catholic Church into a fully world religion. The person and ministry of Pope Francis are seen as part of the continuing realization of that transformation. The body of the film is divided into six chapters representing the major themes of Francis’ first year as pope. By analyzing these themes both individually and collectively, a more complete picture of the Francis effect emerges, namely, the realization of the Second Vatican Council and a concrete expression of how to preach the Gospel in today’s world. The film concludes by raising the essential question: what happens now? Will those who are inspired by Pope Francis transform their communities, and society as a whole, by living and sharing the Gospel of mercy and love? Pope Francis has not come to overturn doctrine and age-old beliefs that are the bedrock of our Catholic Christian faith! He wants to make those teachings understandable and part of our lives. He opens doors to a faith that offers attractive, compelling answers to questions deep in the hearts of all men and women. There is something incredibly appealing here not only to Catholics, but to Christians and to all men and women of good will. Is it any wonder then, why the world is listening to him? Francis, Bishop of Rome, reminds us each day of the words of his predecessor Saint John XXIII over 50 years ago at the beginning of the Second Vatican Council: “The substance of the ancient doctrine of the Deposit of Faith is one thing, and the way it is presented is another.” With Pope Francis, it’s the same story we have heard for ages, but the packaging has indeed changed! For those in the USA, Bermuda, Puerto Rico, St. Croix and Guam, please check your TV guides to find the broadcast times of this excellent documentary on Pope Francis.  For more information, call 1-888-302-7181.

The Francis Effect - Promo 2 from saltandlighttv on Vimeo.

See below for the state, city and station that the Francis Effect will air on. Please check your local stations for date and time.