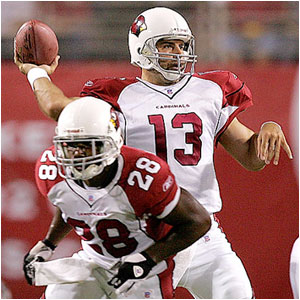 You may think a sport which celebrates violent collisions, bone jarring hits and jar dropping bravado would have little to do with faith. But when the Arizona Cardinals and Pittsburgh Steelers square off in Super Bowl XLIII Sunday night there will be plenty of faith stories between the hashmarks. From Arizona Quarterback Kurt Warner's unabashed evangelizing to Pittsburgh Steeler's Pro Bowl safety Troy Polamalu's devout Greek Orthodox faith, fans are guaranteed to hear God praised in post game interviews no matter which team emerges victorious.However, you need not wait for post game interviews to catch a glimpse of faith and sports. Salt + Light Television invites you to kick off your Super Bowl Sunday with the "Faith Bowl" this half-hour program, features a panel of professional athletes discussing the many challenges of maintaining their faith amidst the glitz and glamour of professional sports. Family Theater Productions produced the program in collaboration with Catholic Athletes for Christ and the Knights of Columbus. Canadian actor Chris Kramer, is the moderator of the panel that includes Mark Loretta, a Major League Baseball player with the Los Angeles Dodgers, and former pro soccer player Antonio Soave.
The Super Bowl is the greatest sporting event of the year but after the last fan leaves Raymond James Stadium, and TV's across North America turn off late Sunday night what principles will guide your life? Believe me they won't come from the half time show, they will come from the values and core beliefs that you can hear about in the FAITH BOWL. Air times are Sunday, February 1st at 5pm ET, 9 pm ET, 1am ET Monday, February 2nd at 1:30 pm ET.