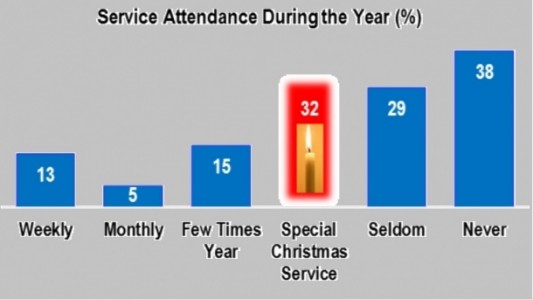 You would think we are a religious nation. Some 1 in 3 Canadians – adding up to more than 10 million people – say that they are attending special Christmas services. To put things in perspective, that total in our allegedly secular nation easily exceeds the number of Canadians who earlier this year watched the Super Bowl, Grey Cup, or the final game of the Stanley cup final. And the number is only slightly below the number of people who say that, the day after Christmas, they plan to join the stampede to Boxing Day sales. Such are the findings of a new Angus Reid Global on-line survey of 1,508 Canadians completed earlier this month. The measure of error is 2.5%. Sociologist Reginald Bibby of the University of Lethbridge, who assisted with the survey and analysis, says the magnitude of Christmas service attendance is both unexpected and remarkable. “At Christmas time, 14% of Canadians who worship fairly regularly will find themselves sharing the pews with another 18% who normally are somewhere else – making for a total of 32%. Not a shabby market share for late December.” What is particularly noticeable is the attendance spike for people who are Roman Catholic, United, and Anglican. Some 23% of Catholics outside Quebec normally attend services. But that figure will more than double to 48%. In Quebec, where regular attendance has plummeted since the 1960s, just 13% of Catholics typically attend services; but the Christmas level will balloon to 38%. In the case of the United and Anglican churches, normal attendance levels in the 25% range will jump to temporary Christmas service levels of around 50%. The increases in evangelical churches, where regular attendance is the highest in the country at around 45%, will be a bit more modest, but still could reach almost 60%. The 18% of Canadians who are “Christmas only” attenders are slightly outnumbered by regular worshippers in the three Prairie provinces. However, they out-number the regulars in British Columbia, Ontario, and – in particular – Quebec and the four Atlantic provinces. The “Christmas Onlys” are just as likely to be male as female. They do, however, stand out in tending to be younger than regular attenders: they comprise 18% of Canadians who are under the age of 55, compared to 11% for regular worshippers. The finding is important. It shows that lots of younger Canadians have not abandoned religious groups. They still are showing up on their own from time to time. Reflections on the Findings What does it all mean, especially in a place like Quebec, where just about everyone has assumed the Catholic Church is in deep trouble? Or in the rest of the country, where the common lament is that the golden days of solid attendance are long gone? For starters, it means that faith, led by Christianity, continues to be important for a sizable number of Canadians. But things need to be kept in perspective. The finding that 2 in 3 people are not in Christmas services is also a reminder of the current Canadian religious reality of polarization. Some people value faith, some don’t, and a lot of ambivalent, “religiously undecided” people are currently in the middle. They could go either way. That qualifier aside, the numbers at Christmas services point, Bibby says, to an important fact: “There’s lots of latent faith in Canada. The valuing of faith readily surpasses active involvement. Or to put things in more crass and memorable terms, the number of people who find faith important readily surpasses the number of bottoms in pews.” The prevalence of latent faith should surprise no one. Close to 8 in 10 of the people who only attend at Christmas reported in this latest survey that they were raised in pro-faith Protestant and Catholic homes. So it is that the same proportion acknowledge that “the religious aspect of Christmas is important to them personally.” The “Christmas onlys” are near-unanimous in embracing the concept of “Christmas” over “Holiday Season.” They will resemble regular attenders in celebrating with trees and decorations, along with carols, gifts, and giving. Some 60% of their Christmas dinners will be preceded by table grace – compared to 87% for regular attenders. “Some of the Christmas Onlys,” Bibby comments, “want little more from religious groups. These ‘same time next year’ people are into what we’ve been referring to for years as ‘religion à la carte’.” But, a cause for pause is that a significant number of these same people, who constitute something of an “‘ambivalent middle” between embracing religion and rejecting it, have been saying that they are open to greater involvement. The asterisk? They have to find their involvement to be worthwhile for themselves and their families. By ‘worthwhile,’ most are talking about solid ministries that address their spiritual, personal, and relational needs. “It seems to me,” observes Bibby, “that these are hardly unreasonable or excessive expectations of groups that aspire to be more than clubs for the initiated.” The proverbial bottom line? “This reading of Christmas attendance should come as great news for Canada’s groups,” says the University of Lethbridge sociologist. “It provides a reminder of what’s possible. To put it mildly, this is hardly a time for leaders to respond by chastising people for packing the place once a year. That would be like the lame sports owner who looks at the sold-out park and complains, ‘Yah, the place is jammed, but the fans don’t come out all that often.’” In sharp contrast to such debilitating morbidity, the presence of the much-maligned “Christmas crowd” should serve as a reminder of the existence of remarkable opportunity and need – and the urgency for life-giving responses on the part of the nation’s religious groups. - Dr. Reginald Bibby is a best-selling author and professor of sociology at The University of Lethbridge who has been monitoring social trends in Canada now for four decades. The trends research is continuing in collaboration with pollster Angus Reid Global and Andrew Grenville. The findings on the significance of Christmas will be part of Bibby and Grenville’s new book, The Future of Life in Canada, which will be released in late 2014. Media contacts: Reginald Bibby: bibby@uleth.ca Andrew Grenville: andrew.grenville@angus-reid.com