The Chilean crisis: Lessons on reform and leadership from Pope Francis 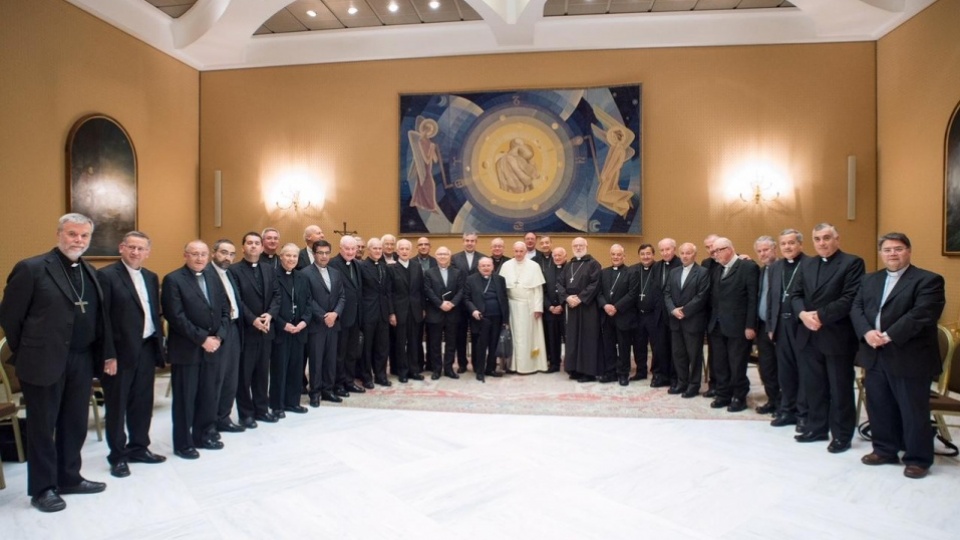 Pope Francis with the bishops of Chile at the conclusion of their summit in Rome. Courtesy of Vatican Media
Lots of news came from the Vatican last week, most notably the closed-door three-day meeting of the pope and 34 Chilean bishops to discuss the clerical sexual abuse and cover-up that’s plagued their country for decades. At the end of the meeting each bishop tendered his resignation to the pope, an unprecedented occurrence.
This is a complex story with far-reaching implications. I would just point to one of these implications, which touches on the question of reform in the church and how Francis sees his leadership role as pope.
Francis initiated a process of discernment months ago, after his tumultuous visit to Chile. Then he sent Archbishop Charles Scicluna on a fact finding mission to Chile. Upon receiving Scicluna’s report, he met personally with Chilean abuse survivors, begging forgiveness on his own behalf and on behalf of the church: “I was part of the problem! I caused this. I am very sorry, and I ask your forgiveness.” He admitted publicly his errors of judgement and perception about the Chilean abuse crisis in a letter to the country’s bishops and called them to Rome. And finally, last week, he personally led the bishops through a collective examination of conscience that resulted in their abdication of ecclesial power, an unprecedented move, as I said. Note that the bishops will remain active in ministry while the pope discerns whether or not to accept the resignations.
There are two key takeaways from this narrative that touch the question of reform in the Francis era.
First: deep, lasting reform happens when hearts are changed (conversion), rather than people removed.
Second: hearts become more open to change if they see change in others. In other words, if Francis preaches conversion, he must practice what he preaches.
I remember when Francis was first elected and one of the Cardinals (a resident archbishop not working in the Vatican) told me, “We gave Francis a reforming mandate; the Vatican bureaucracy needs to be reformed. He might need to clean house!” Then, over the subsequent three months, no heads rolled. So I asked respected Vaticanista John Thavis why Francis wasn’t removing anybody. He said for the first time what many have said since, “Francis is more concerned with the conversion of the Roman Curia than the reform of it.”
That’s not exactly the textbook answer for institutional reform in the modern world. But it captures Francis’ approach to reform. Over the years and through very complex processes—like the Chilean crisis—we’ve seen over and over again how Francis stresses and models conversion as the determinant in all church reform.
The resignation of the Chilean bishops is, I believe, a good example of this reforming methodology in action. I don’t think the Chilean bishops were necessarily thinking of resigning en masse when they traveled to Rome last week.  But something happened during their encounter with Francis, as he led them through a process of spiritual discernment.
His credibility as a spiritual father was only enhanced during that process by the example he had already given them: personally meeting with Chilean abuse survivors and admitting publicly that he was mistaken and personally to blame for causing some of the pain.
Francis might not accept the resignations of all the Chilean bishops. Only four bishops seem to have had strong ties with the chief abuser, Fr. Fernando Karadima. But by freely renouncing their authority in light of the pastoral situation as an entire episcopal conference, they have made an unprecedented and impressive gesture. It is a gesture that suggests a conversion has taken place, and thereby a new and penetrating reform could be underway not only in Chile but across the Catholic Church.
There is no doubt that these bishops see in Francis a truly credible spiritual leader, one who genuinely lives as he calls others to live, not perfect by any means, but totally open to the path directed by the Holy Spirit—totally open to conversion. It’s worth quoting that famous paradox by GK Chesterton, concerning the apostle Peter:

“When Christ at a symbolic moment was establishing His great society, He chose for its corner-stone neither the brilliant Paul nor the mystic John, but a shuffler, a snob, a coward—in a word, a man. And upon this rock He has built His Church, and the gates of Hell have not prevailed against it. All the empires and the kingdoms have failed, because of this inherent and continual weakness, that they were founded by strong men and upon strong men. But this one thing, the historic Christian Church, was founded on a weak man, and for that reason it is indestructible. For no chain is stronger than its weakest link.” (Heretics 1905)

It’s not an understatement to call what happened in Rome last week a reckoning. Most likely, justice demands Francis accept at least a few of the resignations. But if the pope is right that true reform happens through conversion, then the broken and shamed Chilean bishops may still become powerful agents of reform going forward, especially on the abuse crisis in the Church and worldwide.
More generally, all Catholic leaders—in dioceses, parishes, universities, organizations—would do well to reflect personally on Francis’ model of leadership. Reform is not a thing we do but a thing that happens to us. And if we can free ourselves to let it happen, as Francis does, processes with unimaginable potential for good will begin, and other individuals will open themselves too. Belief in the Holy Spirit demands that openness to change—conversion—no matter how difficult it may be to grasp as a concept, accept, and live out. As Francis reminded us in his homily on Pentecost Sunday:

“The Spirit frees hearts chained by fear. He overcomes all resistance. To those content with half measures he inspires whole-hearted generosity. He opens hearts that are closed. He impels the comfortable to go out and serve. He drives the self-satisfied to set out in new directions. He makes the lukewarm thrill to new dreams. That is what it means to change hearts.
Plenty of people promise change, new beginnings, prodigious renewals, but experience teaches us that no earthly attempt to change reality can ever completely satisfy the human heart. Yet the change that the Spirit brings is different. It does not revolutionize life around us, but changes our hearts. It does not free us from the weight of our problems, but liberates us within so that we can face them. It does not give us everything at once, but makes us press on confidently, never growing weary of life.
Where the Spirit is, something is always happening; where he blows, things are never calm.”