The Catholic family of churches: East and West | One Body 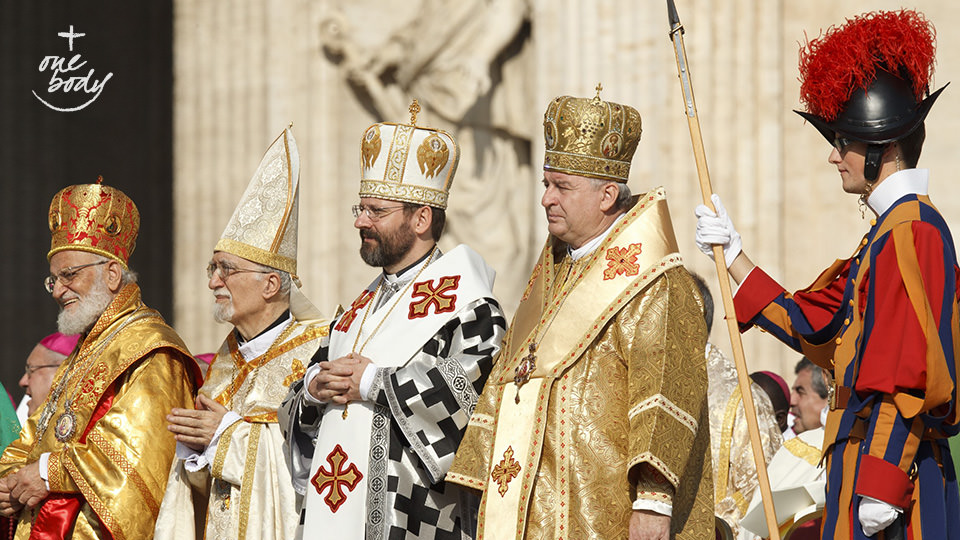 The Catholic family of churches: East and West

One of the most beautiful and striking images that has stayed with me from the funeral mass of Pope John Paul II in 2005, was an ensemble of very ornately vested bishops gathered around the Holy Father’s coffin after communion, lifting up prayers and incense amidst a chorus of Greek and Arabic chanting. The appearance of these bishops seemed to catch certain news announcers (even Catholic ones) off-guard, who referred to them variously as Greek Orthodox, Eastern Orthodox, Oriental bishops, and so on. Many Orthodox bishops did attend the funeral, of course, but these were seated in a separate section among Lutheran, Anglican, Evangelical, and other churches not in full communion with Rome. In reality, the bishops who gathered around JPII’s coffin were not Orthodox bishops at all. They were patriarchs and major archbishops of the 23 Eastern Catholic Churches that share full communion with the Bishop of Rome and, together with the Roman Catholic Church, constitute the universal family (or communion) of Catholicism. These churches are Armenian, Coptic, Ethiopian, Syrian, Syro-Malankara, Syro-Malabar, Chaldean, Maronite, Italo-Albanian, Melkite, Ukrainian, Ruthenian, Romanian, Greek, Bulgarian, Slovak, Hungarian, and various smaller churches from Eastern Europe. Each of these Eastern Catholic Churches is headed by a patriarch (elected solely by the bishops of that Church) or major archbishop (elected by the bishops of that Church and ratified by Rome) or a metropolitan or hierarch (appointed by the Roman pontiff), who oversees with autonomy (sui juris) the governance and pastoral/sacramental life of his respective Church. Each Church identifies its foundation through one of the apostles (e.g., Peter, Andrew, Bartholomew, Thomas, etc.), and each resides within a distinctive rite (or liturgical, theological, spiritual, and disciplinary tradition) that developed out of the great centres of early Christianity geographically identified within the eastern parts of the ancient Roman Empire: Jerusalem, Antioch, Alexandria, and Constantinople. The Catechism of the Catholic Church identifies six distinctive Eastern rites (besides the Latin rite of the West) in the Catholic Church, namely Armenian, Alexandrian (or Coptic), Syriac (East and West), Byzantine, Maronite, and Chaldean (see CCC, 1203). These rites are expressed in various languages (e.g., Greek, Arabic, Syriac, Ukrainian, Malayalam, etc.) according to the local vernacular of the faithful of each church community. In many instances, owing to the unique origin and history of each Church, and/or their country of origin, Eastern Catholic Churches may or may not have an Orthodox counterpart. This is the result of reforms within Orthodox communities or Catholic missionaries working among the Orthodox or “incomplete reunions” between Rome and leaders/members of various Orthodox Churches or other circumstances in particular times and places. The Maronite Catholic Church from Lebanon is the only one that does not have a division within their ecclesial tradition because they never broke communion with either Rome or Constantinople. The relationship of communion with Rome (i.e., the Bishop of Rome), together with the distinctive histories engendered by that relationship, is really THE key feature that distinguishes Eastern Catholics from their Orthodox cousins, vis-à-vis the Roman Catholic Church. It allows for full sharing of sacramental life and pastoral care between any and all of the Catholic Churches, particularly in those times and places when/where the faithful of that Church do not have recourse to the sacraments or the hierarchy of their own tradition. This same level of sharing is not yet possible, however, at least not typically, between Catholics and Orthodox Christians, even if in so many respects – culturally, linguistically, spiritually, liturgically, etc. – Orthodox Christians appear, to an outsider at least, to be almost indistinguishable from Eastern Catholic Christians. The history of broken communion between Orthodox and Roman Catholic Christians, and the bitterness of East/West Christian relations throughout history, along with aspersions and confusions about the autonomy of some Eastern Catholic Churches, has led at times to bitter, unfair, and hurtful characterizations about Eastern Catholics. Pejoratively, they sometimes have been called “Uniates” – which can imply anything from “lapsed” Orthodox Christians to “wolves in sheep’s clothing”, seeking to detract Orthodox Christians from the “true way of Orthodoxy”. It bears mentioning that Catholic and Orthodox theologians have worked hard for decades to overcome these kinds of negative characterizations and the “sheep stealing” endeavours that led to them. The famous Balamand Document, a 1993 agreed statement on “Uniatism” from the Joint International Commission for Theological Dialogue between the Catholic Church and the Orthodox Church, acknowledges that the formation of Eastern Catholic Churches has frequently and inappropriately been used by Catholics as a form of proselytism towards Orthodox faithful, such that:

Whatever may have been the intention and the authenticity of the desire to be faithful to the commandment of Christ: "that all may be one"…the situation thus created [through “uniatism”] resulted in fact in tensions and oppositions. (Balamand, 9, 10)

For their part, Orthodox Churches recognize the right of these Eastern Catholic Churches to continue, while Catholics agree not to establish further "uniate" churches. This is an important ecumenical accord with massive implications into several other ecumenical conversations and commitments. In our ecumenical age, it really is important to understand and to be precise about which Church or church community we are referencing, and to speak of all them with utmost respect and sincerity. All Orthodox and all Catholic Christians are fully members of the Body of Christ. All Eastern Christians – Orthodox and Catholic – are the living bearers of what Pope John Paul II characterized as “the light of the East” that illumines the universal Church (cf. Orientale Lumen, 1). “The Church,” he famously said, “must breathe with her two lungs!” (Ut Unum Sint, 54) – by which he meant that in order to be its truest self, the whole Church must draw from the traditions of both the East and the West. Roman Catholics in particular, he wrote, must “be fully acquainted with this treasure [of the East]”,

and thus feel, with the Pope, a passionate longing that the full manifestation of the Church's catholicity be restored to the Church and to the world, expressed not by a single tradition, and still less by one community in opposition to the other; and that we too may be granted a full taste of the divinely revealed and undivided heritage of the universal Church which is preserved and grows in the life of the Churches of the East as in those of the West. (Orientale Lumen, 1)

Part of the reason, I think, why Eastern Catholic Churches are not better known within the larger Christian family, even by many Roman Catholics, is because the Western (Latin/Roman) Catholic Church is vastly larger than any of the Eastern Catholic Churches individually, and all of them combined. The Roman Catholic Church registers over 1 billion faithful, whereas the smallest Eastern Catholic Church registers only a few thousand members and the largest – the Ukrainian (Greek) Catholic Church – just under 5 million. (Approximately 16 million Eastern Catholics in total from all 23 churches.) This size differential creates a kind of lazy shorthand among many Christians who tend, unfairly, to equate the whole of Catholicism with only its largest (Western/Latin/Roman) representation: i.e., Roman Catholic=Catholic, and vice versa. Eastern Catholics in this equation are simply omitted, or if they are thought of, they are often lumped together with their Orthodox cousins or more generically into the category of “Christian Other”. We hear something of this expressed around Christmas and Easter time when Eastern Christians (both Catholic and Orthodox) adhering to the Julian calendar are said to be marking “Orthodox Christmas” or “Orthodox Easter”, even though many of those celebrating these feast days are in fact Eastern Catholics and not members of Orthodox Churches at all. Another reason why Eastern Catholics may not be well known or may be misunderstood within the larger family of Catholicism is that for the longest time, Roman Catholicism imposed an undue and unhealthy dominating influence, sometimes referred to as “Latinization”, over the Eastern Catholic Churches. This resulted in efforts to curtail distinctive elements of the Eastern rites, including certain liturgical and spiritual traditions, the freedom of their clergy to marry, and various other decisions related to self-governance. Even more harmful to the Eastern Churches (again both Catholic and Orthodox), and certainly deeply influential upon them, has been the reality of persecution by both secular and religious forces within their lands of origin. Pope Francis has characterized the indiscriminate nature of this persecution as an “ecumenism of blood”. One has only to think in recent years of the massacre of Chaldean Catholics in Iraq or Coptic Christians beheaded on a beach in North Africa or the many Byzantine Catholic Churches that survived under the crushing mantle of the Iron Curtain in the 20th century to realize that all of these Eastern Churches have come through extraordinary circumstances of the past to survive to the present. The constancy of persecution throughout their unique, but not entirely dissimilar, histories is truly alarming; often it forced “underground” movements for these churches that kept them largely hidden from view. The survival of Eastern Christian communities under persecution has likewise forced displacements from their lands of origin and relocation (in even tinier numbers) into diaspora communities throughout the West. In Canada, we are blessed to know quite large communities of Byzantine Catholics, especially those of Eastern European origins (e.g., Ukrainian, Slovak, etc.). More recently, with the arrival of immigrants and refugees from the Middle East, and Central and South Asia, growing communities of Maronite, Melkite, Chaldean, Syro-Malabar, and other Eastern Catholic Christians are springing up all over the country. Rather than extinguishing their faith, many of these Eastern Catholic Churches have emerged out of the ordeal of their persecution or hiding more vibrant and faith-filled than ever; and in Greek, Arabic, Syriac, Ukrainian, Malayalam, and other languages, they teach us to sing praises to the Lord and help us to breathe fully with both lungs of the Church. Julien Hammond is the ecumenical officer for the Archdiocese of Edmonton and has served as a member of the Roman Catholic-United Church of Canada Dialogue, the Anglican-Roman Catholic Dialogue in Canada, and the Christian Church (Disciples of Christ)-Roman Catholic International Consultation.