The Angels behind Family Theater Productions 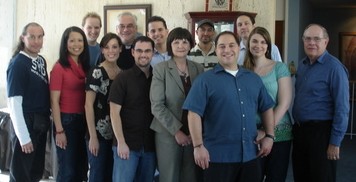 As you may know, six of us went to Los Angeles, California, to receive on behalf of Salt + Light the Gabriel Award for Television Network of the Year on Saturday, October 25th. We decided not to fly back to Toronto until the afternoon of Monday, October 27th, because we were invited to visit the offices and studio of Family Theater Productions on Monday morning.

Much like Salt + Light, Family Theater Productions is called to evangelize culture by using mass media to entertain, inspire, and educate families. It was founded in 1947 by Fr. Patrick Peyton, CSC, who is a candidate for sainthood. And I didn’t know this before, but do you know the slogan “A Family that Prays together, Stays together”? Fr. Peyton coined that as part of their Rosary campaign. My dad used that on us kids all the time when we didn’t want to pray. I never knew its roots would be in a media production company that I would visit someday!Not only that, but Family Theater was a place full of “angels”! From the moment Dan Pitre, Director of Public Relations for Family Theatre Productions, approached our table at the Awards ceremony, and respectfully congratulated us and informed us of Monday’s schedule with them, I was touched! More than the recognition that we were receiving as Gabriel Award recipients, we were being offered respect by people who have been in the field for a long time.As Dan picked us up right at 9:30 on Monday morning as promised, he told us a little bit more about Family Theater (and my mom would love to know this next bit of information). In 1945, Fr. Peyton, convinced that radio was the way to reach the masses, was able to get free air time for a half-hour family program. And guess who he got for his first guest? The legendary Bing Crosby! (oh, how my mom would swoon!) Two years later, Jimmy Stewart hosted the “Family Theatre” radio program, and the series aired for 22 years, making it one of the longest running weekly radio series in history. Located in the heart of Hollywood, Family Theater Productions has had the power to attract Hollywood celebrities. For example, one of their recent productions is a TV series on the

Rosary called “Rosary Stars”. Celebrities talk about the Rosary and pray the Rosary with you!Anyway, Dan was only the first of many “angels” we’d meet at Family Theater. Though there were multiple display cases with over 100 awards received since 1947, including over 14 Gabriel Awards and Certificates of Merit, I was so struck by the down-to-earth humility of every single person we met. True, there is some pride in the way they present themselves, but who wouldn’t be proud with all their achievements? But they remain humble, sincere, and grounded. It was wonderful to see!And then, when the presentation in their little theater started, I was even more awed by the other “angels” there. They all took the time to give a few minutes presentation each in their media field, showed us trailers of their projects, and entertained us with their humour. Tony Sands was a wonderful man who is the Production Coordinator, but also a 'multi-tasking' staff member. He directed the Manifest Mysteries – a series of drama productions based on mysteries of the Rosary. Monica Castagnasso, Producer/Director of Voz Latina & Radio Department, took us to their sound studio, where we met Eleazar Bazini (Elly for short), in-house Sound Engineer and Composer. Elly introduced us to Voz Latina programs, and with my limited knowledge of Spanish, I understood the gist of what he had us listen to.

I enjoyed our tour very much, as I did our lunch conversation, but you know what made the deepest impression on me? It was the Mass we had before lunch. The way they celebrated Mass was so respectful and fervent. There was a familial feeling in their small chapel that comforted my heart. What a friendship to treasure Salt + Light has with Family Theater Productions!If you want to check them out, do so by going to www.familytheater.org.