The Amoris Laetitia debate: Why we shouldn’t be afraid of Pope Francis’ exhortation 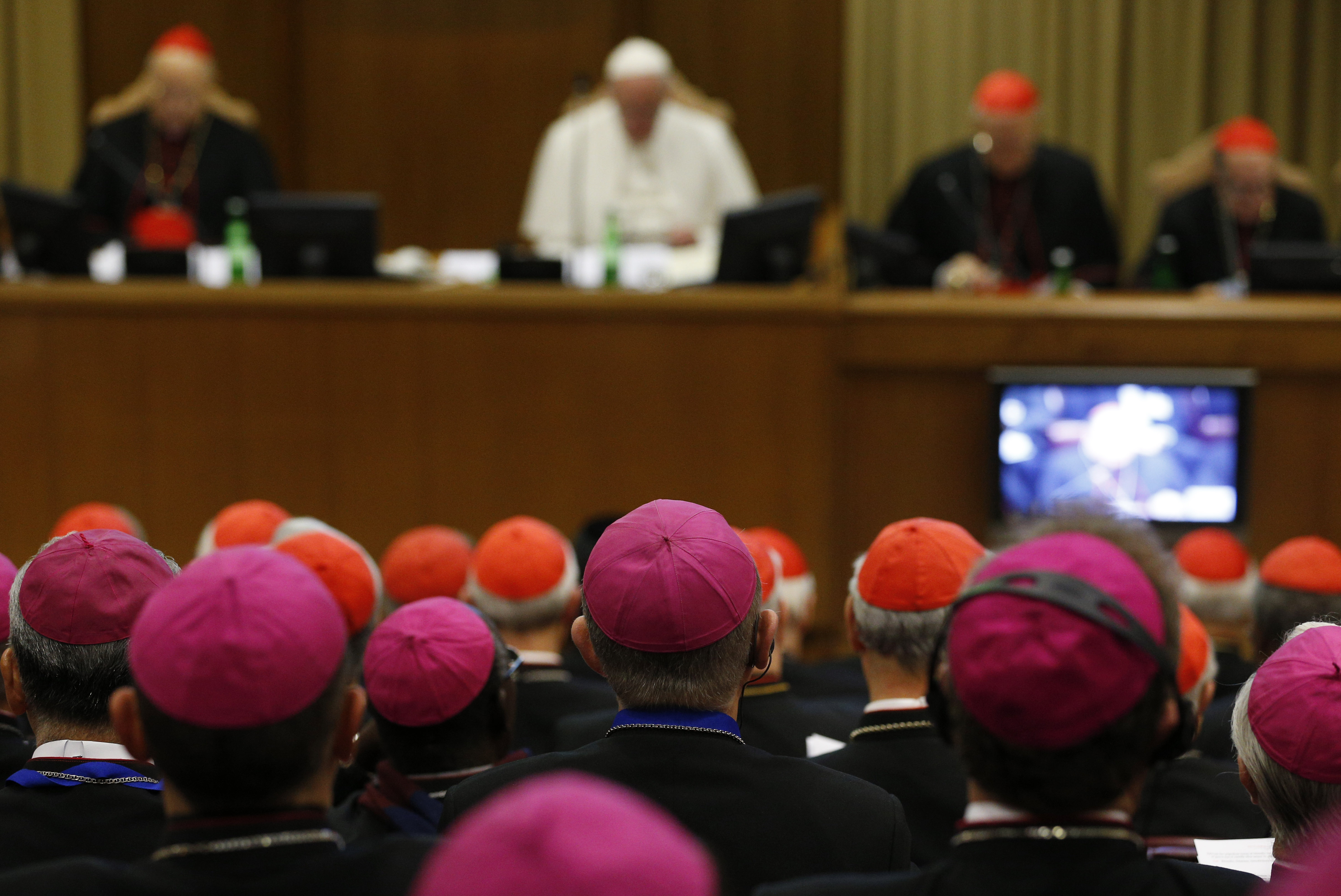 (CNS Photo/Paul Haring: Bishops and cardinals attend a session of the Synod of Bishops on the family led by Pope Francis at the Vatican Oct. 23, 2015.) Over the past few weeks a debate has erupted around Pope Francis’ apostolic exhortation Amoris Laetitia. Four cardinals went public with five “dubia,” or questions about what they see as ambiguity and confusion in the papal teaching, especially related to the question of whether or not a divorced and remarried Catholic can receive Communion (a fifth cardinal has since expressed support for the dubia). They asked the Holy Father to respond directly, essentially giving him an ultimatum, whereby a formal act of correction of the Pope would be issued if he failed to comply with their request. Though most Catholics are oblivious to, or disinterested in the intricacies of the debate, it is clear that these few cardinals—together with a small minority of Catholics, mostly in North America—feel very strongly about the issues raised. No one should doubt their sincerity in the matter. And while a good argument can be made for why Pope Francis will not respond to the cardinals directly, Catholics should educate themselves about the debate and try to understand what's at stake, and what Amoris Laetitia (“AL” for short) is all about. I would like to contribute in a small way to this discussion here, first by providing some context for understanding what is happening, and then by sharing some reflections on why Catholics shouldn’t be afraid of AL and the direction Pope Francis is leading the Church. AL is the official papal teaching that concluded the two-stage Synod of Bishops on the family in 2014-15. It's a 250-page dissertation on love within the family unit and the contemporary challenges it faces. As is typical of Pope Francis, the language is very accessible and the approach is pastorally sensitive. The sections in question by the four cardinals are found in Chapter Eight: "Accompanying, Discerning, and Integrating Weakness". Here, Pope Francis addresses the topic of pastoral engagement with, among others in difficult situations, divorced and remarried Catholics. He says, "A pastor cannot feel that it is enough simply to apply moral laws to those living in “irregular” situations, as if they were stones to throw at people’s lives." (#305) He continues, "It is possible that in an objective situation of sin—which may not be subjectively culpable, or fully such—a person can be living in God’s grace, can love and can also grow in the life of grace and charity, while receiving the Church’s help to this end.351" The now infamous "footnote 351" is where the heart of the debate lies:

"In certain cases, this can include the help of the sacraments. Hence, “I want to remind priests that the confessional must not be a torture chamber, but rather an encounter with the Lord’s mercy” (Apostolic Exhortation Evangelii Gaudium [24 November 2013], 44: AAS 105 [2013], 1038). I would also point out that the Eucharist “is not a prize for the perfect, but a powerful medicine and nourishment for the weak” (ibid., 47: 1039)." 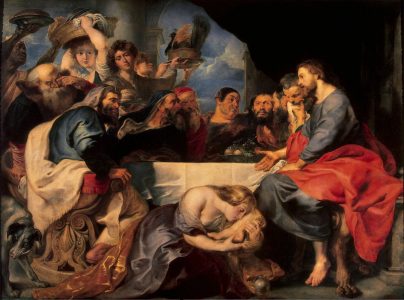 The current AL debate reflects this particular Gospel story in yet another way. Luke is not telling the story of the sinful woman. Though she is a main character, her “many sins” are not even mentioned. Rather, Luke is juxtaposing two very different pastoral approaches: that of Simon and that of Jesus. Where Simon, as a good and faithful Pharisee, would condemn the woman by invoking the law, Jesus restores her dignity by offering mercy, despite her many sins, whatever they were. (Painting: Jesus at the house of Simon the Pharisee, by Peter Paul Rubens, 1618-20) Interestingly, Chapter Eight of AL is equally ambiguous about particular ‘sins’. It is all about the approach of pastors and Catholics to 'irregular' situations. Perhaps this is where some of the confusion lies. If we were to read Luke’s story in order to clarify the woman’s sins and Jesus’ response to them, we would get nowhere. That’s not the point of the story. Likewise, Francis and most bishops at the synod did not want to issue statements about this or that particular ‘irregular’ situation. Francis writes as much in paragraph 300:

“If we consider the immense variety of concrete situations such as those I have mentioned, it is understandable that neither the Synod nor this Exhortation could be expected to provide a new set of general rules, canonical in nature and applicable to all cases.”

The point of AL, therefore, is not to clarify a particular law or teaching of the Church. It is about the way Catholics—especially pastors—approach complex and ambiguous situations. “Simon, do you see this woman?” Jesus asked the Pharisee. Francis is likewise asking the pastors of the Church, “Do you see these people in irregular situations?” 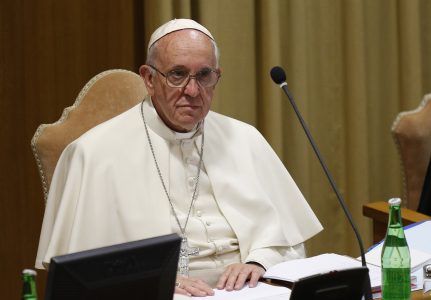 AL is very challenging in this regard: it asks the pastors of the Church to evaluate their own pastoral attitudes in light of the Gospel. While this is invariably difficult, it should not lead to fear. The Church should not be afraid of being more like Jesus. (CNS photo/Paul Haring: Pope Francis looks on at the start of a session of the Synod of Bishops on the family at the Vatican Oct. 22, 2015.) There is one more piece of the current debate I’d like to consider, and that is the Pope’s apparent silence in response to the cardinals’ dubia. Remember that a formal act of correction was threatened should the Pope choose not to respond. I would simply point out that the Pope seems to have responded directly to such questions already, in a seemingly preemptive way, in AL. Immediately following the sections of AL which the four cardinals raise questions about (#300-305), Pope Francis speaks about the “logic of pastoral mercy.” (#307-312) Here I will simply quote the Pope, and trust that the reader will see the obvious relevancy of this explanatory section of the Pope and majority of Bishops’ vision for pastoral ministry and accompaniment to the five dubia, and any others of like nature (emphasis added):

#307: “In order to avoid all misunderstanding, I would point out that in no way must the Church desist from proposing the full ideal of marriage… A lukewarm attitude, any kind of relativism, or an undue reticence in proposing that ideal, would be a lack of fidelity to the Gospel and also of love on the part of the Church for young people themselves. To show understanding in the face of exceptional situations never implies dimming the light of the fuller ideal, or proposing less than what Jesus offers to the human being. Today, more important than the pastoral care of failures is the pastoral effort to strengthen marriages and thus to prevent their breakdown.” #308: “At the same time… without detracting from the evangelical ideal, there is a need to accompany with mercy and patience the eventual stages of personal growth as these progressively appear, making room for the Lord’s mercy, which spurs us on to do our best. I understand those who prefer a more rigorous pastoral care which leaves no room for confusion. But I sincerely believe that Jesus wants a Church attentive to the goodness which the Holy Spirit sows in the midst of human weakness, a Mother who, while clearly expressing her objective teaching, always does what good she can, even if in the process, her shoes get soiled by the mud of the street. #309: “The Church is commissioned to proclaim the mercy of God, the beating heart of the Gospel, which in its own way must penetrate the mind and heart of every person. The Bride of Christ must pattern her behavior after the Son of God who goes out to everyone without exception. She knows that Jesus himself is the shepherd of the hundred, not just of the ninety-nine. He loves them all.” #310: “Mercy is the very foundation of the Church’s life. All of her pastoral activity should be caught up in the tenderness which she shows to believers; nothing in her preaching and her witness to the world can be lacking in mercy. It is true that at times we act as arbiters of grace rather than its facilitators. But the Church is not a tollhouse; it is the house of the Father, where there is a place for everyone, with all their problems.” #311: The teaching of moral theology should not fail to incorporate these considerations, for although it is quite true that concern must be shown for the integrity of the Church’s moral teaching, special care should always be shown to emphasize and encourage the highest and most central values of the Gospel, particularly the primacy of charity as a response to the completely gratuitous offer of God’s love. At times we find it hard to make room for God’s unconditional love in our pastoral activity. We put so many conditions on mercy that we empty it of its concrete meaning and real significance. That is the worst way of watering down the Gospel. 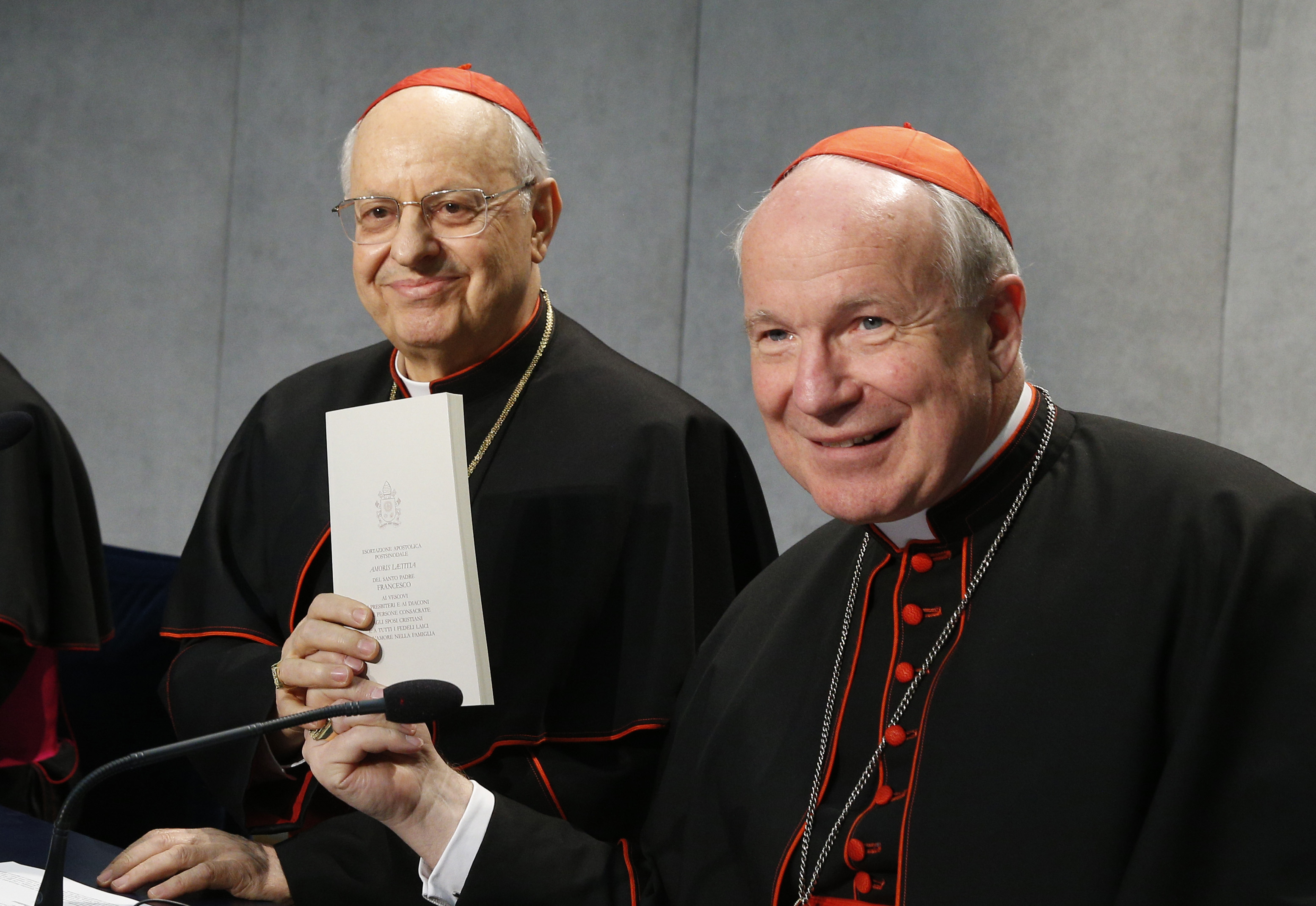 (CNS Photo/Paul Haring: Cardinal Lorenzo Baldisseri, General Secretary of the Synod of Bishops (left), and Austrian Cardinal Christoph Schonborn (right), holds a copy of Pope Francis' apostolic exhortation "Amoris Laetitia" during a news conference for the document's release at the Vatican April 8, 2016. Both Cardinals have been tireless advocates of AL and the Pope's pastoral vision.)