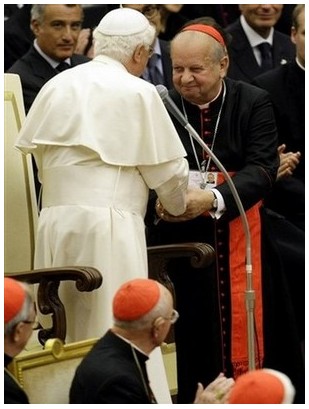 This greeting between Pope Benedict XVI and Cardinal Stanislaw Dziwisz occurred at the October Vatican screening of Testimony. Testimony, which chronicles the life of Pope John Paul II, is based on a book of the same title published in 2007. It features a transcript of conversations with Cardinal Dziwisz, conducted by Italian journalist and Vatican expert Gian Franco Svidercoschi.
This cinematic story attempts to portray Karol Wojtyla as a man, priest, bishop and, finally, the Pope as remembered by his longtime secretary and friend. Cardinal Dziwisz accompanied the Holy Father for forty years of his life, from his times in Krakow until his last days in the Vatican. The film is a testimony of John Paul II’s life, presenting many new facts and interpretations, including those from Karol Wojtyla’s youth and his private life. The film’s most poignant themes include the assassination attempt on the Pope and the moments immediately thereafter, when his life was being saved. Testimony premieres on Salt + Light Television Saturday December 20th @ 8pm ET. - Photo: Andrew Medichini, AP