Telling them apart: Which St. James the Apostle? 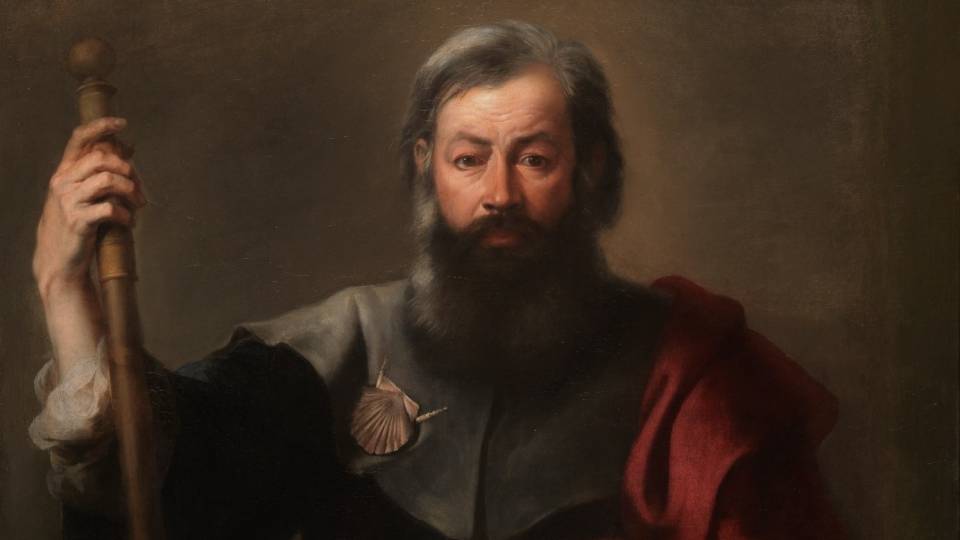 St. James the Greater depicted as a pilgrim to the shrine at Compostela, by Bartolomé Esteban Murillo. Source: Wikimedia Commons.

In our Catholic Christian tradition we’ve been blessed with many role models for holiness in our saints. But sometimes it can be difficult to keep them all straight. In this series, “Telling them apart,” I’m going to present some side-by-side comparisons in order to help us keep track of commonly confused saints. And I’m going to start with two apostles named James.

A few years ago I achieved a long-time goal of walking the Camino de Santiago – a pilgrimage route dating back to the Middle Ages which leads to the tomb of St. James the Apostle in Santiago de Compostela in northwestern Spain. Many of us had started at the border with France, intending to walk the full 800 kilometres across Spain, though I also met people who had begun walking from their homes in Belgium, Germany, and the Netherlands. From time to time, we’d get talking, and someone would ask the inevitable question: Which St. James the Apostle is it? And no one knew. (Evidence of the enduring Catholic tradition of going on pilgrimage just because.) Out of 12 men chosen to be his Apostles, Jesus called two men named Yakob. In English we call them James. But which one is which?

You know how in the Gospels Jesus is always wandering off with Peter, James, and John? This is that James. He’s also the one I walked 800 kilometres to see. James was the brother of John, and they were both sons of Zebedee. James was a fisherman before Jesus called him and his brother to a life of discipleship. Although James appears by name several times in the Gospels and even speaks a fair bit along with his brother John (most famously when they ask for places of honour in Jesus’ kingdom – see Mark 10:37), we know very little else about him. His death is recorded in the Acts of the Apostles:

This is believed to have taken place around the year 44 AD, making him the first of the Apostles to be martyred. So when did he get to Spain? Now, that’s a tricky one. There is no contemporary account of the Apostle James travelling to the Iberian Peninsula to preach the Good News. In fact, the first time we find this legend written down is sometime in the ninth century. Legend also says that after his death his body was miraculously returned to the land and the people he loved and to whom he had preached. I would love to know where the truth lies in all the stories told about St. James and Spain, but we will probably never know. What we do know is that his shrine at Santiago de Compostela was one of the most famous sites of Christian pilgrimage in the Middle Ages after the Holy Land and Rome, and it has experienced a resurgence in popularity in recent decades among many types of Christians and even among many non-Christians. Along with St. Teresa of Avila, this St. James is the patron of Spain. He is often depicted as a pilgrim travelling to Santiago with a staff and a broad-brimmed pilgrim’s hat and a water gourd (though why he is depicted as a pilgrim travelling to his own shrine may be an artistic mystery!). The scallop shell is also a symbol of St. James and his shrine, but how that came to be is yet another mystery. His feast day is celebrated on July 25.

All we really know for sure about this James is that he was one of the Twelve Apostles and that he was the son of a man named Alphaeus. There is a tradition linking this apostle named James with the early Church leader of the same name mentioned in Acts (15:13-21) and in St. Paul’s letter to the Galatians (1:19; 2:12). He was a prominent member of the early Christian community, usually seen as the Bishop of Jerusalem, who spoke at the Council of Jerusalem (around the year 50 AD) – the one where they decided that Christians did not have to be Jews first and live according to the Mosaic law (most importantly, they didn’t have to be circumcised). Paul calls him “the brother of the Lord”. Tradition also has him as the author of the short letter found towards the end of the New Testament. However, many scholars today see these as three separate men. Even if they still link James “the brother of the Lord” and Bishop of Jerusalem with James the author of the epistle (though not everyone agrees that he actually wrote the epistle with his name on it!), they consider him to be a different person from James the son of Alphaeus. But no one really knows for sure. Because tradition says that he was beaten to death by an angry mob, he is usually depicted holding a club. His feast day is celebrated on May 3 together with St. Philip the Apostle. 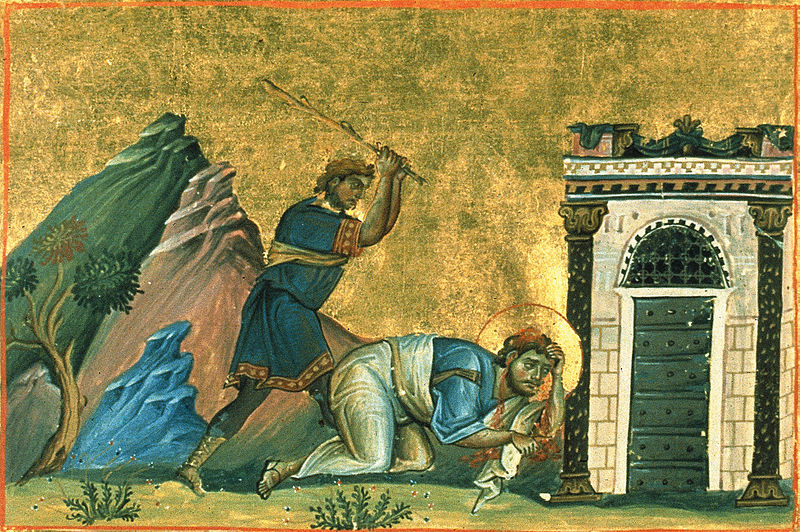 Martyrdom of St. James the Less, from the Menologion of Basil II, a manuscript currently in the Vatican Library. Source: Wikimedia Commons.