Telling them apart: So many Johns, part 1 | Two from Ávila 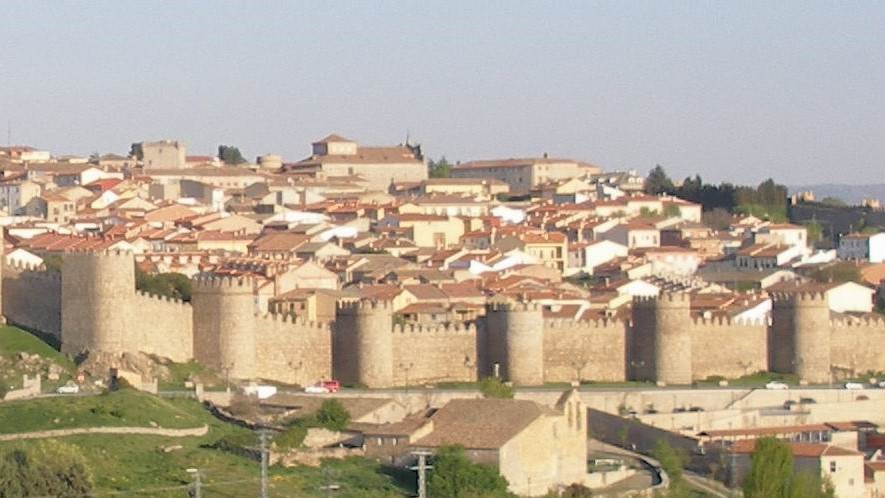 A few years ago I was sitting next to a priest at dinner, and he mentioned to me a practice he had taken up. It’s a good one. Every year he adopts a saint and devotes one full year to reading his or her writings. That year he happened to be reading St. John of Ávila. “Who’s he?” “A sixteenth-century Spanish priest and spiritual master who was a friend of St. Teresa of Ávila. He’s also a Doctor of the Church.” “Oh,” I said. “St. John of the Cross?” “No, he’s a different one.” Seriously?! But then again, with so many saints called John, it’s hard to keep them all straight. From John the Baptist and John the Apostle to the recently canonized John Henry Newman, John just might win the prize for the most popular male saint’s name with close to 150 holy men (from a very rough, unscientific poll) answering to that name. (So here’s a question. If you pray to “St. John” without being too specific, does that mean you get all of them to pray for you?) Well, I have no intention of sorting through over 100 saints in one blog post, so let’s just start with two Doctors of the Church from the Spanish Renaissance. 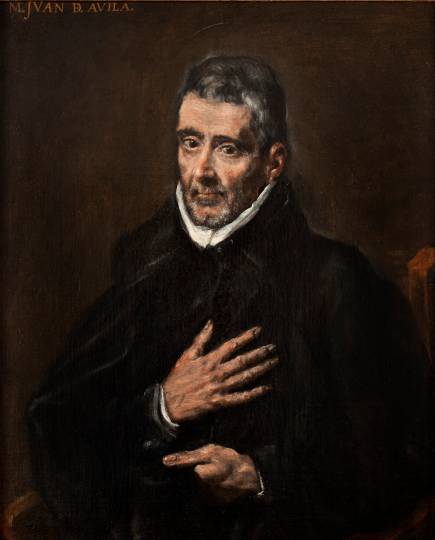 It is a common misconception that the universal call to holiness is something that started in the 20th century. I mean, that individual call, open to all people, to a loving relationship with God is at the core of Christianity, and saints have been writing and preaching about it for centuries, though some focus on it more than others. John of Ávila was one of those saints. Despite his name, this St. John was not from Ávila and doesn’t seem even to have visited the place as far as I can see. It’s a family name: his father was Alfonso de Ávila. And both of John’s parents, like many Spanish Catholics, were of Jewish descent. John experienced a call to conversion and an ascetic lifestyle at an early age but was convinced to take a more active approach to holiness, and so he became a priest. His parents did not live to see his ordination, and having celebrated his first Mass in the church in which they were buried, John sold his considerable inheritance, distributed the proceeds among the poor, and left his hometown to become a missionary in the newly discovered lands across the ocean. But while he was waiting in Seville for a ship to take him to Mexico, he was persuaded instead to dedicate himself to a mission closer to home – the southern lands of Spain, which had recently been liberated from hundreds of years of Muslim domination. So the new evangelization is not just a 20th-century concept either! Starting in 1529, John devoted nine years of his life to missionary work. He was an immensely popular preacher and is known as the Apostle of Andalusia. He did, however, spend a year of that time in jail due to some trouble with the Spanish Inquisition. It seems not everyone was a fan of his preaching. Plus, Catholics of Jewish descent were particularly under suspicion. Fortunately, John was found innocent of all charges, and not only was he allowed to continue preaching, but he found in that time of sorrow and hardship the basis for the deep spirituality which can be found in his works and which so inspired his followers. He also began writing his most famous work, Audi, filia (Listen, daughter), during his imprisonment. John of Ávila lived during times of crisis and confusion for society and for the Church. He saw as key to reform within the Church a greater focus on education and formation for both the laity (including children) and the clergy. He founded a number of schools, including the University of Baeza, and was invited by his bishop to attend the Council of Trent as his theological adviser. John’s poor health prevented him from going, but he wrote memoranda which were influential in some of the council’s decisions regarding reform of the clergy. John’s life was a true marriage of active and contemplative forms of Christianity, his apostolic zeal being born from and nurtured by an intense inner life of prayer and contemplation. He was not only a popular preacher, but he was also sought out as a spiritual director, and his letters reveal friendships with other holy people of his day, including St. Teresa of Ávila, St. Ignatius of Loyola (John was a big supporter of the Jesuits in Spain and encouraged many of his own followers to join the fledgling community), St. Francis Borgia, St. John of God, and St. Juan de Ribera (more Johns!!!). He was canonized in 1970, and in 2012, at the opening of the synod on “The New Evangelization for the Transmission of the Christian Faith,” appropriately, Pope Benedict XVI declared him a Doctor of the Church. His feast day is May 10. 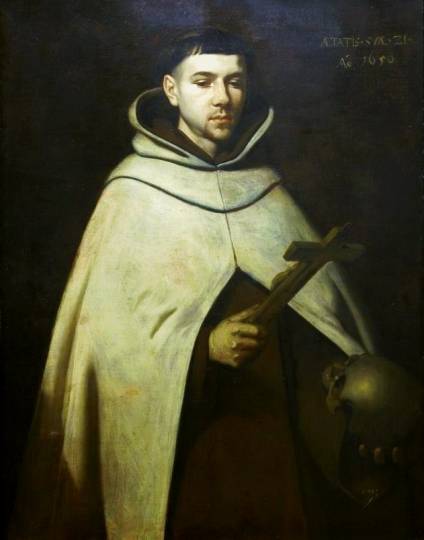 This Spanish St. John and Doctor of the Church is much better known than his older contemporary and namesake. He is especially known for his mystical writings, and most especially for his poems, which are considered some of the greatest works of Spanish literature and of Catholic literature in any language. I heard that St. John Paul II learned Spanish just so he could read the poetry of John of the Cross in the original. And who has not heard the term “the dark night of the soul” (even if it is possibly the most misunderstood term in all Christian spirituality)? Born into a family of Jewish converts near Ávila in 1542, John’s early life was marked by poverty and sorrow, his father having died when he was only three years old and one of his brothers soon after. He received a basic education at a school for the poor and later studied with the Jesuits. In 1563, he joined the Carmelites, taking the name John of St. Matthias, and continued his studies at the University of Salamanca in theology and philosophy. In 1567, he was ordained a priest, but John was not satisfied with his life among the Carmelites. He desired a more austere existence more in line with the original vision for the Carmelites, which had been relaxed by the pope in 1432. He considered leaving the Carmelites in order to find the life he desired among the Carthusians, but that all changed in the fateful summer of 1567 when he met by chance, as it seemed, an older Carmelite by the name of Teresa, who had begun a reform in 1562, attempting to return to the Rule set out in 1209 with its stricter lifestyle of greater fasting, prayer, silence, and simplicity of habit. Because of their return to less substantial footwear, they became known as the Discalced (meaning “shoeless”) Carmelites. Teresa invited John to join her in her reform, and so was born one of the most celebrated holy friendships in our Catholic tradition. After spending some time learning from Teresa, John began the reform of the male side of their order. On November 28, 1568, he established a new monastery at a place called Duruelo and took the new name we know him by today: John of the Cross. But not everyone was happy about the reforms. Although there was support for them in certain high circles, there was also a desire to keep reformed and non-reformed Carmelites within the same order. In hindsight, this may not have been the best solution. In 1576, at a General Chapter of the order in Italy, a decision was made to suppress the Discalced houses. However, the reformers in Spain had the support of the papal nuncio, so when John was ordered to leave Ávila, where he had been acting as spiritual director to Teresa and her nuns for five years, he stayed because, from his point of view, he owed his obedience to the nuncio as having the higher authority. On the night of December 2, 1577, some (non-reformed) Carmelites broke into John’s house and carried him off to their monastery in Toledo as their prisoner. Kept in solitary confinement in a tiny cell, he was subjected to regular, vicious public beatings and a diet of bread, water, and the occasional salt fish. It was during this time that John began to write. When he escaped from his prison on August 15, 1578, he took with him a poem that would become, with some additions, his famous Spiritual Canticle. Although John continued his mission of reform and the Discalced Carmelites were soon granted by the pope permission to separate from their parent community with John holding positions of leadership for many years, the tensions and controversy in John’s life did not end there. In June 1591, because he did not see eye-to-eye with the Vicar General of the new order, he was exiled to the remote monastery of La Peñuela in Andalusia. There he contracted erysipelas, a bacterial infection, and though he sought treatment at the nearby monastery of Úbeda, he died on December 14, 1591. Although he only left behind a handful of poetry, it is written with such profundity of thought and such artistic skill that he is considered one of the greatest poets of the Spanish language. And together with his friend, Teresa of Ávila, he is revered as one of the great writers of the tradition of Christian mysticism. He has left for us in his poetry and his prose (which mostly expounds on his poetry) an invaluable portrait of a human soul in a state of utter loving abandonment to God. His feast day is December 14. 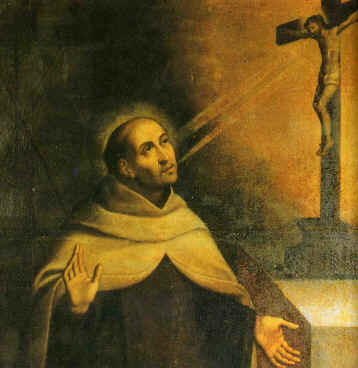 Depiction of St. John of the Cross in prayer by an anonymous artist of the 17th century (Source: Wikimedia Commons)

St. John of God (1495-1550) experienced a profound religious conversion through the preaching of John of Ávila, and following the encouragement of his mentor, dedicated his life to looking after the poor. He is the founder of the Hospitaller Order of Saint John of God, who are found throughout the world continuing their original mission of service to the poor. St. Juan de Ribera (1532-1611) was another friend and disciple of John of Ávila. He was also the Archbishop of Valencia from 1568 until his death. He is a somewhat controversial figure for a saint because it was on his watch that the moriscos (converts to Christianity from Islam) were expelled from the region and all of Spain in 1609. However, newer studies of contemporary documents may help to clear his reputation, as they are helping in general to elucidate this very dark and difficult period of Church history. 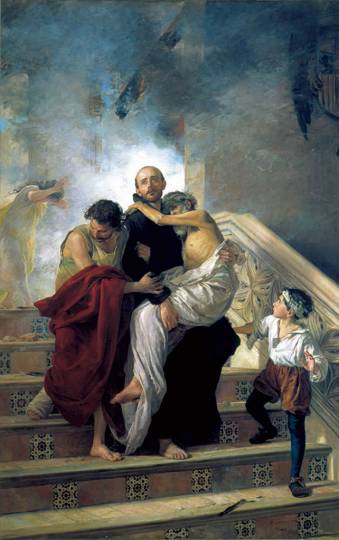 St. John of God Saving the Sick from a Fire at the Royal Hospital in 1549 by Manuel Gómez-Moreno González