Wednesday afternoon the Synod of Bishops on the Middle East received a special guest speaker: Rabbi David Rosen, advisor to the Chief Rabbinate of Israel and director of the department for Inter-religious Affairs of the American Jewish Committee. 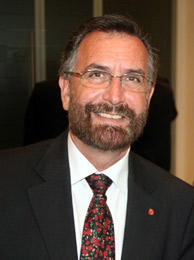 Indeed the location of some of these communities... means that they often bear the brunt of security measures which the Jewish State feels obliged to maintain in order to protect its own citizenry against continuous violence from within the Palestinian territories. It is only right and proper that such Palestinian Christians should express their distress and their hopes regarding the situation.

Sadly, he pointed out that such expressions of distress are not always in keeping with the Church's teaching regarding the Jewish people. This is surprising but not unexplainable. Most people in the Holy Land – as in any other area- go about their lives in one community, usually surrounded by the same people, who share the same language, culture and religion. As a result many Jewish and Christian people in the state of Israel do not come into contact with people of other faiths or cultures, and are unaware of the progress that has been made in Jewish-Catholic relations in the past decades. Rabbi Rosen said he has come across members of the clergy, even hierarchy in certain countries, who are ignorant about contemporary Judaism and Nostra Aetate, the document that is the basis for the Catholic Church's current relations with Judaism. The situation is slowly changing, he said, and two things are driving that change. First was the visit of John Paul II to the Holy Land in 2000. The image of the Pope praying before the Western Wall and “asking divine forgiveness for sins committed against the Jews down the ages, was stunning and overwhelming in its effect,” he said. The second factor fueling the change in relations was the influx of 50,000 Christians from the former Soviet Union. They are connected to Jewish society through family and cultural ties and see themselves as “part and parcel” of the Jewish majority and at the same time Christian. There are also thousands of migrant workers from the Philippines, Asia, Eastern Europe, Latin America and the Sub-Saharan desert who are all practicing Christians. This increase in numbers of Christians has raised their visibility. Rosen said the plight of Palestinians in general and Palestinian Christians “should be of profound concern to Jews both in Israel and the Diaspora because the Talmud teaches that any act of disrespect toward another person is an act of disrespect toward the Creator Himself. Although there has be violence in the recent past, there have also been signs of hope, Rosen said. “There has been a notable improvement in conditions, for example regarding the free movement of clergy, and there have also been recent indications that there is a growing understanding of the needs of the local Christian communities by the authorities, notwithstanding security challenges,” he said. Dialogue between Christians and Jews is necessary, but not enough to improve the situation. The main cause for concern is the situation for Christians who live between Israeli and Palestinian territories and get caught up in that conflict. The source of that conflict, according to Rosen, is “whether the Arab world can tolerate a non-Arab soveriegn polity within it's midst.” In order to have any hope of resolving that issue, there must be dialogue between Christians, Jews, and Muslims.The Rabbi pointed out that the Synod's own Instrumentum Laboris “describes the dialogue of the Church with her elder brothers as not just neccessary, but as essential.” He closed his speech using the prayer John Paul II used at the Western Wall:

Send your peace upon the Holy Land, upon the Middle East, upon the entire human family; stir the hearts of those who call upon your name, to walk humbly in the path of Justice and Compassion.

Earlier in the day Rabbi Rosen spoke with journalists about his address. The issue of recent changes to the Israeli Citizenship oath was brought up. The changes would have new citzens swear their allegiance to the "Jewish and democratic" nature of the state. Rosen explained that the term "Jewish" in this context does not refer to Judaism as a religion but to the Jewish culture. Two Muslim representatives were expected to address the Synod on Thursday.