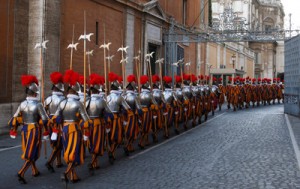 As Alessia Domanico reported on Perspectives on May 6th, the Swiss Guards are thirty stronger, having sworn in their new recruits.
In an elaborate ceremony, the Swiss Guards corps officially installed their latest recruits. The ceremony takes place every year on the 6th of May, the anniversary of the Sack of Rome. On that day in 1527, the Bourbon General launched a hasty attack on the Roman papal state. The Spanish mercenary troops broke through the Torrione gate, invaded Borgo Santo Spirito and, in short order, took St. Peter's Basilica One hundred and eighty nine Swiss Guards tried to defend the papal state from the invaders, but they were outnumbered. One hundred and fifty six of the Swiss Guards were killed, including the Captain Kaspar Roist. The 42 remaining guards escorted Pope Clement VII out through the passetto, the "secret" passage linking St. Peter's to the safety of Castel Sant'Angelo. Today the Swiss Guards generally keep order in the piazza during the pope's public events and guard the various entrances to the Vatican. Don't be mistaken though, they are still highly trained soldiers. Before a Swiss man can apply for admission to the elite corps, he must have attended the Swiss Military Academy The swearing in ceremony is impressive. The corps troops in, perfectly in sync, wearing their distinctive medieval uniforms in the colours of the Medici family. The new recruits are called forward one-by-one to take their oaths. They take hold of the Swiss Guard Standard with their left hand and with their right had in the air, three fingers raised to symbolize the Father, the Son and the Holy Spirit. They take their oath in one of four official Swiss languages: Italian, French, German or Romansch, saying:

I swear I will faithfully, loyally and honourably serve the Supreme Pontiff Benedict XVI and his legitimate successors, and also dedicate myself to them with all my strength, sacrificing if necessary also my life to defend them. I assume this same commitment with regard to the Sacred College of Cardinals whenever the See is vacant. Furthermore I promise to the Commanding Captain and my other superiors, respect, fidelity and obedience. This I swear! May God and our Holy Patrons assist me!

It is truly a sight to behold. - CNS photo/Paul Haring