Staying Focused in the Holy Land 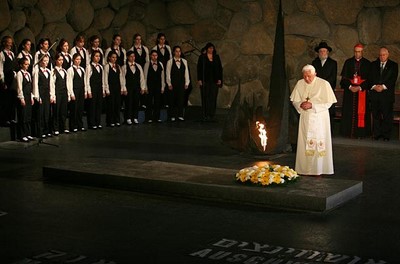 He didn't mention Nazi Germany. He didn't apologize for failings of the Church during the Holocaust. He looks cold. He looks detached. It seems that you can't please everybody, and this lesson is becoming even more evident for Pope Benedict as we hear criticisms of his visit to Yad Vashem. As I watched our broadcast coverage, I saw a Pope in contemplation... his words were thoughtful, his interest in meeting of the Holocaust survivors was genuine. I found it moving. If he looked a little stiff, or awkward, I can understand. He has the world watching him, one false move and he's pounced on by his critics. Even in good will gestures, he can't catch a break. And those critics... how much of these complaints are a small handful of disgruntled voices pushed on a pedestal by the media? How much of this is sentiment shared by those on the ground? I do not know. But what I do know is that things like this can spin out of control, and before you know it, a successful and beautiful Papal voyage is overshadowed by one idea. (remember Africa? What else was talked about in the secular media other than condoms?) The Holy Father's journey has been packed with events -- he's met many different religious leaders, continually condemned anti-Semitism, stressed peace in the region, and perhaps most importantly he has reached out to the Christians in the Holy Land who often feel so alone, isolated, and separated from the Universal Church. I hope and pray that all these different storylines are played out, and that the remaining three and half days don't get lost in media spin. You can follow Salt + Light's coverage to see things first hand, find Papal addresses in the document section on Zenit, or check out articles from the ground at CNS. The Vicar of Christ is walking in the land that Jesus walked... walk with him. It's amazing to consider the amount of activities he's participating in. It's a grueling trek, in an exhausting climate, for an 82-year old. But joyfully, he perseveres, sharing a message of hope -- to not just Christians, but to all of the Middle East. Let's pray that this message, and all the messages that flow throughout the different themes of his trip, don't get overlooked. As I said: walk with him, and hold him in your prayers...