St. Scholastica and the Benedictine Monks of Mission, British Columbia

Today we recognize the feast of St.  Scholastica. 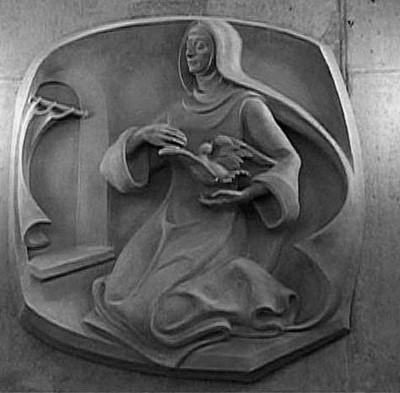 Scholastica is the younger sister of St.  Benedict, the father of Western Monasticism, and I'd like to share a charming story from St. Gregory about the bond between the two.  Benedict was visiting Scholastica and she had the sense, likely divinely inspired, that this would be the last time the two would meet on earth – so she asked her brother to spend the evening in prayer and conversation.  Benedict refused because he did not want to break the monastic rule by being away from his monastery, Monte Cassino.  So his little sister prayed to God to intercede on her behalf, and a violent storm came about.  Benedict was forced to stay with his sister for the night.  After the visit, when Benedict was returning to Monte Cassino, he had a vision of Scholastica’s soul ascending to heaven in the form of a dove. The passing of St. Scholastica is imagined in a bas relief at the Benedict Monastery, Westminster Abbey, in Mission, British Columbia. 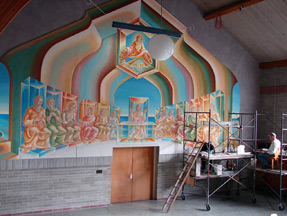 That bas relief is one of many works of art by Benedictine monk Fr. Dunstan Massey.  An accomplished artist, Fr. Dunstan's art is found throughout the Monastery.  One of his most impressive works is a fresco of the Last Supper that watches over the monks in the dining hall.  The creation of Fr. Dunstan’s masterpiece is documented in the 2006 Metro Productions documentary In the Footsteps of Michelangelo.  Salt + Light Television is pleased to present this beautiful documentary on Saturday, February 27th, at 9pm ET.  You won't want to miss this wonderful portrait of a priest who brings glory to God by the work he creates! The feast of St. Scholastica is also special to us here at Salt + Light as we are working on our own production about the Benedictine monks at Westminster Abbey. Three of us stayed with the monks from Palm Sunday to Easter Monday of last year, capturing their life, work and liturgy.  From what we filmed, we are painting a picture of how the liturgy flows into the life of the monks, particularly during the climax of the liturgical year: the Triduum.  More details will follow in the months ahead!