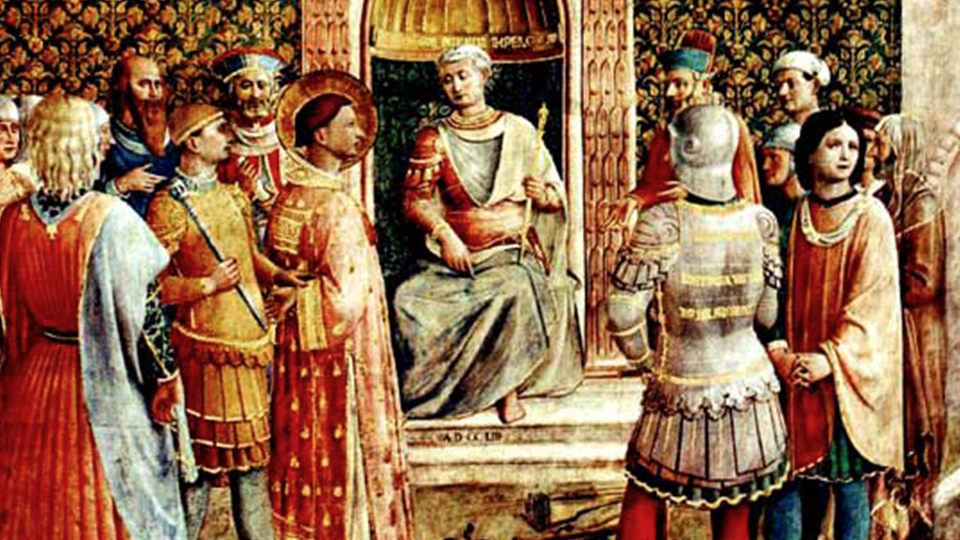 CNS/Paul Haring
In the Universal Church today, we celebrate the feast of St. Justin the Martyr – one of the first Christian apologists and a martyr for our Faith. In 1882, Pope Leo XIII had a Mass and an office put together for his feast day, initially set as April 14. This was the day after his death as it was recorded in the Martyrology of Florus. But since April 14 often falls within the Easter celebrations, the feast was moved in 1968 to June 1. St. Justin was from Samaria and lived in the second century. His father brought him up without any belief in God. When he was a boy, we know that Justin read poetry, history, and science. As he grew up, he kept on studying with the central purpose of finding the truth about God. One day as he was walking along the shore of the sea, Justin met an old man. They started talking, and because Justin looked troubled, the man asked him what was on his mind. Justin answered that he was unhappy because he had not found anything certain about God in all the books he had read. The old man told him about Jesus, the Saviour. He encouraged Justin to pray so that he would be able to understand the truth about God. The Scriptures and the witness of the earliest Christian martyrs led Justin to the realization of faith. His conversion happened sometime between the years 132 and 137. In his zeal for the Faith, he travelled to Greece, Egypt, Asia Minor, and Italy, bringing many people he encountered closer to Christ. According to tradition, he was ordained a priest or a deacon. In his writings, Justin wrote: “I have resolved that in all I say, my only purpose will be to speak the truth; I will say it without fear or any other consideration, even if I should at the same hour be cut up in pieces.” Justin was a teacher who continually prayed and read the Scriptures. He grew to love it with all of his being. In his experiences, he was deeply touched and impressed by Christians who were not afraid to die for their belief in and love for Jesus Christ and the Church. He used his deep knowledge of pagan philosophy to explain and defend the Christian faith in his many writings. It was in Rome that Justin was arrested for being a Christian. The judge asked him, “Do you think that by dying you will enter heaven and be rewarded?” “I don't just think so,” the saint answered. “I am sure of it!” He was then put to death; the year was 166. Today, as we celebrate the memorial of his life and death, we humbly implore the Lord that, attentive to the teaching of St. Justin the Martyr, we may abide at all times in thanksgiving for the gifts of knowledge, insight, and courage. May Justin watch over our works here at Salt + Light and be pleased with all of our efforts, in the name of the New Evangelization. For this we pray, Amen.