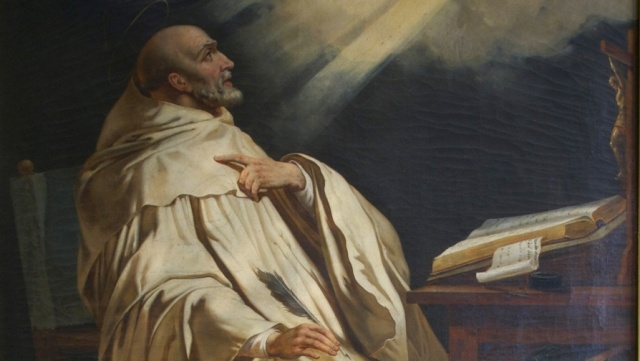 Memorial: August 20 Considered the last of the Fathers of the Church, St. Bernard of Clairvaux has been celebrated for centuries as a man of great intellect and greater holiness. As is evident in his prolific writings, Bernard was one for whom the Word of God impregnated every aspect of the human experience. He knew the Bible by heart and was said to speak and write scripturally. Relying solely on the pages of Sacred Scripture and the teachings of the Early Church Fathers in the development of his theology, Bernard rejected philosophical traditions that detracted from the integrity of the faith, and dismissed those who sought knowledge for the sake of curiosity, personal profit, or their own renown. In his seminal collection of sermons on the Song of Songs, he wrote: “There are also those who seek knowledge in order to edify, and this is charity. And there are those who seek knowledge in order to be edified, and this is prudence.” Bernard’s theology was mirrored in his spirituality, which was grounded in his love of Sacred Scripture and his special devotion to the Blessed Virgin. He was a champion of Lectio Divina — the prayerful reading of Bible passages, and a leading figure in the explosion of Marian devotion that dominated Catholic piety in the twelfth century. For Bernard, life was a radical experience with the love of God; his was a life of fraternity, asceticism, and a daily encounter with the humanity of Christ. Love for Christ, he said, is the first step to genuine prayer. Born in 1090 to a Burgundian family of great wealth and prestige, in 1113, he entered the premier Cistercian monastery at Cîteaux accompanied by thirty noblemen he had convinced to join him. His life’s work would be the renewal of the Cistercian order and monastic life in general, in addition to the refinement of Marian devotion and theology. Within three years of his arrival at Cîteaux, he was sent to establish a Cistercian house at Vallée d’Absinthe, which as abbot he renamed Claire Vallée, or Clairvaux. From Clairvaux, the “Valley of Lights,” he would reignite the vigour and vibrancy of Western monasticism, and return it to its roots through strict adherence to the austere Rule of St. Benedict. After overcoming its initial growing pains, under Bernard’s guidance the abbey would attract a flurry of postulants, including the saint’s widower father and five brothers. Before long three more Cistercian monasteries would spring up to accommodate the overflow of vocations flocking to Clairvaux. All in all, Bernard’s work resulted in the foundation of 163 Cistercian monasteries across Europe. At the time of his death on this day in 1153, Clarivaux boasted 700 religious and 363 monasteries attributed their establishment to his influence. The adept abbot was known for his affection for his brother monks, and his reintegration of manual labour into the daily life of the monk, following the model and motto of St. Benedict: Ora et labora, “work and prayer.” In addition to his pastoral duties as abbot, Bernard played an key role in the suppression of numerous heresies that arose in his day, and was charged with preaching the Second Crusade, which under his spiritual direction was wildly successful in attracting recruits: common-folk and nobility alike. In his day, he was among the most influential figures in all of Christendom, admired as the “conscience of all Europe.” He secured the election of Pope Innocent II over the antipope Analectus III, and in 1145 his disciple and confrere, Bernardo of Pisa, became Eugenius III. The example and influence of St. Bernard’s austerity revolutionized the practice of Western monasticism, and prompted Pope Alexander III’s formulation of the Code of Canon Law. His canonization in 1174 made him the first Cistercian monk to be raised to the glory of the altar, and his eloquence as a preacher gained him the title Doctor Mellifluus, which means “Honey-Sweet” or “Honey-tongued” Doctor. For ages untold, the great abbot of Clairvaux will be extolled for what Pius XII termed the “brilliance of [his] doctrine and splendor of [his] holiness” (Doctor Mellifluus 2). May we look to his life as an example of the beauty of our faith and the simplicity with which we are to live it out. Saint Bernard of Clairvaux, today and always, pray for us! An excerpt from Sermon 83 of St. Bernard’s Sermons on the Song of Songs

“Love is sufficient of itself; it gives pleasure by itself and because of itself. It is its own merit, its own reward. Love looks for no cause outside itself, no effect beyond itself. Its profit lies in its practice. I love because I love; I love that I may love. Love is a great thing so long as it continually returns to its fountainhead, flows back to its source, always drawing from there the water which constantly replenishes it. Of all the movements, sensations and feelings of the soul, love is the only one in which the creature can respond to the Creator and make some sort of similar return however unequal though it be. For when God loves, all he desires is to be loved in return; the sole purpose of his love is to be loved, in the knowledge that those who love him are made happy by their love of him. The Bridegroom’s love, or rather the love which is the Bridegroom, asks in return nothing but faithful love. Let the beloved, then, love in return.”

Memorare of St. Bernard of Clairvaux

Remember, O most gracious Virgin Mary, that never was it known that anyone who fled to thy protection, implored thy help, and sought thy intercession was left unaided. Inspired with this confidence, I fly unto thee O Virgin of Virgins, my Mother, to thee I come, before thee I stand sinful and sorrowful. O Mother of the Word Incarnate! Despise not my petitions, but, in thy mercy, hear and answer me. Amen.